Patti Abbott is the author of MONKEY JUSTICE (Snubnose Press) and the co-editor of DISCOUNT NOIR. 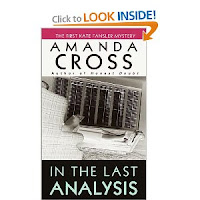 a Cross wrote 14 books about Kate Fansler, an English Professor who solved crimes and cogitated on the issues of the day: feminism being foremost in her mind.

In this her first novel, a student, referred by Professor Fansler to a psychoanalyst friend, is found stabbed to dead on his couch, his fingerprints on the knife. Fansler solves the murder with the help of her friend, ADA, Reed Amhearst. All of Cross' books take place in an academic setting and she uses it well to explore the issues of the day that concerned her.

Heilbrun, the mother of three children, was the first woman to receive tenure at Columbia University although it was not for writing this series, something that was looked down on by her colleagues.

Heilbrun committed suicide at the age of 77. She was not sick but perhaps feared illness or the loss of independence. She also believed fervently in the right to decide when to end one's own life. You can find more out about her last day here.


Ed Gorman is the author of BAD MOON RISING. You can find him here.

THE JUGGER BY RICHARD STARK
How this for an opener? I'm about to review the worst book Donald E. Westlake ever wrote. Don't take my word for it. Here's Westlake himself speaking. 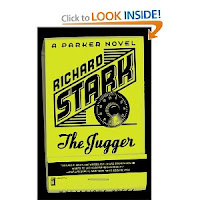 "I spoiled a book by having him do something he wouldn’t do. The sixth book in the series is called The Jugger, and that book is one of the worst failures I’ve ever had. The problem with it is, in the beginning of the book this guy calls him and says “I’m in trouble out here and these guys are leaning on me and I need help,” and Parker goes to help him. I mean, he wouldn’t do that, and in fact, the guy wouldn’t even think to call him! (laughs)"
I found this quote on The Violent World of Parker website, a goodie. More" Westlake has more than once cited The Jugger as a failure, and although I’ve never seen it straight from the horse’s mouth, I’ve heard he considers it the worst book he’s ever written. Well, Mr. Westlake, if this is the worst you can do after cranking out more books than I can count, I am in great envy of your abilities.
"Mr. Westlake is wrong about Parker acting out of character in The Jugger. He seems to have forgotten the details, which is perfectly understandable, as the book was written in 1965 and he probably has not had much reason to revisit it if he doesn’t care for it that much."
Me again: I frequently find myself liking books most other people don't and vice-versa. The Jugger's a good example. No it's not a great Parker adventure but it's got a lot of early Sixties atmosphere, a cast of truly despicable characters and a constantly shifting plot.
What we have here is a kind of psychodrama. We have a dumb but crafty Sheriff, a smart but unlucky FBI man, a dumb but uncrafty lady friend of a pathetic dead guy who'd been trying to find an imaginary sum of money hidden by Joe Sheer.
It goes like this. Parker and Sheer worked together sometimes and then Sheer got old and all he did was serve as a way station for Parker. If you wanted to talk to the big man you had to call Sheer who'd screen you. But when Parter got a nervous communication from Sheer he got concerned that maybe the old man was coming apart and would blow Parker's cover. He had to go to the small Midwestern city and make sure that didn't happen.
But when he got there Sheer was dead. And the (imaginary) enormous amount of stolen money was nowhere to be found--yes there;s money but it's modest compared to what others think. So Parker proceeds to deal with both problems. Under the name of Willis.
The Psychodrama: The Sheriff is a dope but a brutal one and Parker has to string him along in order to learn what he needs to. Watching Parter mislead him is a game worth watching. The Sheriff is a human pit bull. He's capable of killing Parker at any moment. But then Parker is more than willing to strike first. On the other hand the FBI man is slick and political. Mitt Romney could play him. Quoting Norman Mailer on a writer he didn't like: "He's as full of shit as a Thanksgiving turkey." But he suspects that this guy Willis is really a big catch under another name. He's already signing a book contract and learning to wave in parades.
So The Jugger ain't perfect and ain't gonna win none of them NYC awards but I don't care. I just enjoyed this particular take on Parker's world. I read it in two dazzled sittings.

I loved Heilbrun's feminist scholarship and was delighted when I read Death in a Tenured Position after working at Harvard, because she captured that poisonous little community so well. She is missed: good thing she left so many enjoyable books behind.

In honor of Veterans Day, I selected the Murder to Mil-Spec anthology released last year by Wolfmont Publishing. My review is at http://kevintipplescorner.blogspot.com/

I've not read the Jugger but now I want to.

THE JUGGER was definitely not that bad, let alone the worst book Westlake ever wrote. I can't think of any really bad books he wrote among those I've read (which number 60+), as I can with Ed McBain for instance (MARY MARY).

As for Heilbrun, I started reading Amanda Cross with the first one but after six I have up, other than the COLLECTED STORIES. For me she was too dry.

This week's Forgotten Book post is now up on my blog.

The worst imaginable Westlake book is ANARCHAOS. He could never bottom that.

I think all the Parker and Grofield books are great. Parker was acting in character by protecting his secrecy.