Movies in My Youth 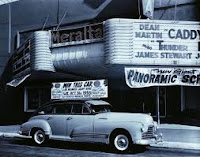 At a dinner party on Saturday night (all of us movie lovers and over sixty) we remembered with puzzlement how in our youth, we went to a movie whenever we wanted--regardless of what time it officially began. The film would end and begin again immediately and when we came to the part where we began watching it, someone would say, "This is where we came in."

Then we would leave unless we liked it enough to sit through it again. Which we sometimes did. Or someone would say, "Let's see that part again where...." And after seeing it again, we would go.

Why did we watch movies that way? Why was the chronology not important? Did theaters not post times? Can't remember.
Posted by pattinase (abbott) at 2:00 PM

We've discussed this and laughed at it. I can still remember my mother taking us to see WEST SIDE STORY when we were kids and coming in after the rumble. When we reached that part again, we left.

How insane is that?

Now I feel like Woody Allen in ANNIE HALL - if the credits have started I don't want to go in.

I am very strict about this now. Even if I have seen it, I must start at the beginning. Phil can see it in bit and pieces. Even if he's never seen it.

There are movies I've seen a million times - It's a Gift, Animal House, etc - that I can easily watch a little part of, but if I want to see the whole thing I want to see it from the start.

Me and my dad went to every Bond film from Goldfinger to Live & Let Die. In those days, they were a double bill with the previous Bond film as 'support act'. We just went in an stayed until my dad fell asleep for about the third time.

Now? Ten minutes before so I can get in the 'right mind set.'!

I'm over 60 and have always refused to watch a movie after it's started. The only exception would be catching something on TV that i've seen numerous times.

Actually, I hate even missing the first few minutes of a TV show--ones like BREAKING BAD or JUSTIFIED. I always feel like a key element is missing from my understanding.

And I never skip around in books. Phil also does that.

I know someone who always reads the last chapter of a novel first, so she can just relax and enjoy the book!

I don't even read the back of a book and rarely watch a trailer.(Especially these days when they spoil the whole bloody film!)

I'm sixty-two and have never watched a film in the theater without being there at the beginning. As others mention, old familiar films I have a fondness for, I can start other than the beginning.

So true about trailers. Luckily I tune them out, much like commercials.
How did you manage that Randy? As i said, where I lived you just seemed to walk in and start from wherever. Except for the kiddie features that seemed to have scheduled times.

I suspect (and I may be talking out of my hat) that the difference between then and now has to do with what the studio charges the theatres; I have heard the studios now charge one half of the proceeds of each showing OR a set amount, whichever is greater. If that's the case, they have to charge for each showing.

I miss the days when you got a couple of cartoons, previews, a featurette, maybe a newsreal, and a double feature -- and you could stay all day! [Something I remember was convenient in many pulp stories.]

When you came into the middle of a movie, you either began watching from there, or you irritated everyone around you by talking until you reached the beginning.

Until the explosion of multiplexes, we only had one theater in town. One screen. I always made note of the starting times and allowed enough time to get to the showing I wanted. If it was a big film, you might have to wait in line for a ticket.

Eventually it was split into two smaller screens, then another two were added.

Of course I stopped going to theaters years back and a good thing I did. From the proliferation of cell phones and people running off at the mouth, I couldn't enjoy a film these days.

Movies didn't cost 10 bucks to see back then. The biggest ticket in Grand Island, Nebraska, when I was a kid was 75 cents. Seeing something from the beginning was no big deal. The phrase "This is where we came in" evokes a whole period of my childhood.

Today, I watch TV that way. Check in to a movie or program, check out. It's just moving wall paper most of the time anyway, and unless it's pay per view I don't care what I miss.

Coming in part way through must've been a little confusing for Hitchcock flicks.

Since I was a kid, everything was confusing.

Jackie is the only person I know who will turn on the television, put on a movie she's never seen that has half an hour to go before the end, and just watch it to the end! When I ask her how she knows who everyone is or what is going on, she just shrugs it off.

It's sort of like reading the end of a book and not the rest of it. Of course, if it's a Lifetime or Hallmark movie you pretty much know what it's about.

Phil does that too. So now we each know two crazy people.

Movies back then have great storylines, animation is sub par but I really like it.

I'm a few years younger (born on the day Sputnik was launched, if you care to work that out), but I remember watching lots of movies that way. I remember my friend's mom would drop us off at the movie theater, go do her shopping, then come pick us up. We watched whatever movie it was from the time we came in until we had to leave. Sometimes we got to see the whole thing, sometimes not. At other times, if we really liked a movie, we'd sit through it a second time right away. It wasn't until I was in my late teens that ushers started checking tickets and clearing out the theaters between shows.

Small towns might be less likely to have continuous play theaters than large cities...even the small city of Barre, VT, where my father was raised seemed to have discrete times for the matinees he attended as a child (with the newsreel and cartoons and all).

Theaters with continuous play were simply doing what television would, later (and, I guess, simultaneously). And many moviegoers took movies no more seriously than some television viewers do today...

If I can't usher myself into the cinema hall and find my own seat, a good 10 minutes before the docus and trailers roll, then I know I'm late and that really pisses me off. I'm usually among the first ten to enter the hall and then I sit back and glare at those who enter late and block my view.

Or, to have had continuous-play theaters...

Was a time, back in '66, when I had to kill three hours every day waiting for my ride to get off work. Sometimes I went to a movie and saw the feature until it was time to leave. I'll never forget sitting through SEX AND THE SINGLE GIRL two times and maybe part of a third. Excrutiating. Even Natalie Wood couldn't save that turkey.

Jeff, my wife is the opposite of yours. She'll insist on seeing a movie that starts at 9 even knowing she goes to bed at 10 and won't see the end.

That reminds me of when my sisters were kids, Cap'n, and my mother made them go to bed at their normal bedtime, even though that meant they'd miss the second half of THE WIZARD OF OZ.

I don't want to say how many years ago, but in the small town theatre where I took tickets, the show (never called it a movie) started at 7 and 9 each evening. Each show ran for two days and then changed. I'm pretty sure they showed a cartoon and often a newsreel before the feature film. But no matter what the first showing only ran long enough to ensure that the people exited a little before 9 so we could start the second showing at 9. The only time the show ran longer was on a double feature night, usually two westerns. Very seldom did anyone arrive more than 10 minutes after show started. I just read on the Internet this week that that theatre is likely the only "atmospheric" theatre still be operated in North America by the same family. If you want to know what an "atmospheric" theatre is - I had no idea, Google Lido Theatre The Pas to see photos.

People called it "the show" where I lived too. The movies changed twice a week. In the neighborhood theaters in Philly, I think they did only show them twice. But in the downtown theaters, a movie ran continuously. I will look it up. Thanks.

Sorry to chime in late on this one, patti. My comment (along with a shout-out to you) can be found here. Thanks.