How I Came to Write This Story: Benoit Lelievre and Les Edgerton 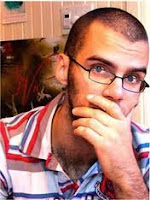 My girlfriend, life partner and real life buddy cop Josie works for Cirque du Soleil. She's not an acrobat or a contortionist or anything like that, but she's working there. That doesn't get me a lot of perks, except maybe for the bragging rights to say this, but I get to see a show once in a while.

Last October was the premiere of Michael Jackson: The Immortal World Tour at the Bell Center and being a Michael Jackson fan, I went there and had a lot of fun. It's a great show. I had a lot of fun over there, rocking out to MJ's tunes. I forgot about his dark half for a few hours and let the music carry me somewhere else.

It's a few days later that I have learned about Off The Record, Luca Veste's project of making an anthology with stories based on classic rock songs. Luca offered me a place on the project, granted I could write a story before the deadline and I did. On any given date that was not after a Michael Jackson tribute, I would have written a story about another song. Probably Motorhead's IN THE NAME OF TRAGEDY or The Stooge's DOWN ON THE STREET.

But not that day.

Still reeling from Michael's unparalleled danceable vibes, I decide to try my luck with BLOOD ON THE DANCE FLOOR, a song that tells a story about the dangers of desire. I love to write about desire because it's a deceitful emotion. It camouflages itself as love or other pure feelings, but it's nothing like it. Desire is a primal urge, a chemical reaction to beauty and pheromones. No matter how we try to disguise it, make it wear a veil of purity, desire is raw and often ugly.

I'm not going to spoil what BLOOD ON THE DANCEFLOOR (I know, Luca “britified” the title a little bit), but it's a story that involves desire, dancing (a lot of dancing) and a girl named Susie. Because that's what it's all about right? Desire. Women and a shitload of confusing behaviour. Thanks to Josie, Micheal Jackson, Cirque du Soleil and Luca Veste, this story was born.

Benoit Lelievre writes stories. They often involve crime, but they are about sad and desperate people, first and foremost. People who are pushed to the extreme and decide to retaliate and take back what's theirs. He also writes on a daily basis on his blog Dead End Follies (www.deadendfollies.com) where he reviews books, movies and talks about different things pop culture related.

generosity in giving us space here to talk about how we came to write our stories for Luca Veste’s remarkable anthology, OFF THE RECORD. Patti has a well-deserved reputation for helping both new and established writers gain exposure to the reading public and to our colleagues and peers. Thanks, Patti!

Now. How I came to write my story for the collection, based on Tom Waits’ song “Small Change.”

I’ve lived in New Orleans for much of my life and from time to time, I’d go into a bar I haunted on a regular basis—The Dungeon--and the barkeep would say, “You just missed so and so.” He’d name a movie star or famous singer, and I’d shake my head at my bad luck. One time, I went into The Dungeon with my girlfriend Cat and the bartender told us we’d just missed Tom Waits. I asked where he’d been sitting and the guy pointed out a stool and I went over and sat down, positive I could still feel his body warmth on the seat.

One of those existential moments…

I’ve been a fan of Waits’ work forever. Most of it. I don’t care as much for the songs when he’s been through rehab—has too much of the smooth, mellifluous sound stylings of a Harry Connick, Jr. I much prefer the raspy, whiskey voice he employs that I imagine is his sound just before he goes into rehab.

The voice he sings “Small Change” with.

For years, I’ve used that song whenever I teach a unit on poetry when I’m toiling at a university. Kids are amazed that I consider this poetry and they much prefer it to the sonnets of John Donne or Andrew Marvell. Nothing against these fine poets, but today’s youth seem to connect with street minstrels like Waits somewhat more. Many are surprised to learn that there are those of us who consider songs like this as brilliant poetry. A few years ago, I spent three years as writer-in-residence at the University of Toledo and based a presentation on Mr. Waits’ song. The second year I was there, a pair of students approached me after the first class session and asked when I was going to “do the Waits thing.” They said that was the sole reason they’d taken the class. Cool.

So, when Luca Veste emailed me and the others about his project and asked us to write a short story about a song, it was the only one I even considered. The impetus of how to construct it was fairly straightforward and normal for a writer. I just played the “what if” game. What if Tom Waits gathered stories for his song material sometimes? What if he wandered into The Dungeon looking for material the day the bartender mentioned he’d been there?

From that, it was an easy story to imagine. I just put myself back in time to earlier that day in the Quarters so I didn’t miss him, erased Cat from the setting, and had Tom approach me to see if I had any stories to sell. And, he’d ask me. I look like a guy who has stories. That’s because… I do. And, if I’m going to tell them, I’d like the audience to pay me in drinks. That’s just kind of the way it works.

So now you know…

I wrote pop fiction in the bio. Not sure why. I meant pop culture!

Thanks, Patti! I thought this old photo was buried and wondered where you'd gotten it from and realized I still have a website up that I'd completely forgotten. These days, I'm mostly on my blog at www.lesedgertononwriting.blogspot.com/ Not a big deal but if anyone goes to the old website they won't find me there.

This is a nice thing you're doing for a terrific collection and a wonderful editor, Luca Veste! Great to be a part of it.

Ben - I still got that title wrong...damn. Will sort it out!

Great idea for a blog. Good stories. I like the behind-the-scenes stuff of writing. Thanks, Patti, Benoit and Les.

Two my favorite writers. Thanks for posting this, Patti.

New writers. For me, at least. Cool.

I am utterly impressed.