MY Life at the Theater-Richard III and Henry VI 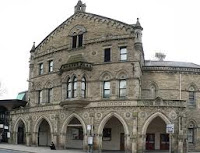 This was one of the great thrills of our life at the theater and of the year we spent in England (1994-95).

It was called The Wars of the Roses--the struggle between the House of York and theHouse of Lancaster in the 15th century.

The Battle of Towton, 12 miles south of York, was fought by 50,000 Englishmen with casualities of 30,000 making it one of the bloodiest battles fought on English soil. Henry was deposed in 1461 after Lancaster's defeat at this battle and the crown moved into York (Plantagenet) hands. The program actually states it is a myth that he murdered his two nephews to prevent their ascension to the throne. Okay. Maybe it was Henry VII.

Of course, seeing this play done in York was a new experience since the people of York saw Richard III quite differently than other productions we have seen. He was their boy.

I have seen Richard III many times, including this summer, but Henry VI is less often performed. Very enjoyable.
Posted by pattinase (abbott) at 7:49 PM

Patti - What a wonderful experience that must have been! And seeing that play in that setting must have given you a very different perspective...

Shakespeare's history plays don't show up here very often. I think RICHARD III is one of his best.

Certainly is Phil's favorite. We saw him portrayed by a woman in Stratford--I think I told you that--still wonderful although perhaps not as menacing.

Wow, I didn't realize you spent a year in England.

We've spemt quite a bit of time in York over the years, mostly on book hunting trips. (There's a really good Indian restaurant there, by the way.) We've seen a few shows at the York Theatre Royal too, including Shaw's Pygmalion, but never the Shakespeare.

Phil taught at Salford University and then did a Fulbright in Amsterdam. Two great years.

We had a very good friend in Stockport, just outside Manchester. And we love Amsterdam.

Oh, yes. We were in Stockport and everywhere else in that area.