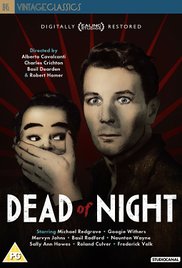 A 1945 film that is basically an anthology of four horror/ghost stories bound together by the idea that an architect has been dreaming each of them in a continuous nightmare. The stories vary in quality-two I liked, one was more humorous than scary and one didn't work for me. And pulling them into one story at the end seemed odd too. Four writers, four directors and although we finished it, I wouldn't recommend it. The only familiar face was Michael Redgrave's. Apparently during the war, the British studios were not permitted to make horror movies and this was an early attempt to renew making them.I am sure this film  has its fans based on the ratings, but we were not among them.
Posted by pattinase (abbott) at 7:00 AM

Oh, sounds as though this could have been interesting. Sorry to hear it didn't work for you.

The Michael Redgrave section - why are these dummies always called "Hugo"? - was really creepy and scared the crap out of me the first time I saw it. The rest of the movie was fairly forgettable.

I'm sure I've seen the 'dummy' piece. Maybe all of it. Been a long time, though

*must not go there*

Steve Oerkfitz said...
This comment has been removed by a blog administrator.
2:21 PM

Al Tucher said...
This comment has been removed by a blog administrator.
3:04 PM

"Room for one more..." That sequence has been referenced umpteen times ever since it was quoted in the cult horror movie PHANTASM. I'm sure most horror fans and filmmakers who have quoted it in the post-PHANTASM years have no idea it comes from DEAD OF NIGHT. I like this movie even the dull stories. Redgrave as the deeply disturbed ventriloquist is clearly the best told story of the lot and one of the most influential horror motifs. I think it was the first time on film the motif was used though it was done many times in stories from numerous pulp writers to John Keir Cross's notorious story "The Eye" to Ray Bradbury's "And So Died Riabouchinska".

True, DEAD OF NIGHT is a good one to watch on a dark and stormy night with a nice cup of cocoa and a packet of custard creams.

(B. Crider posted a note to this page).


I recently found some rather old ALFRED HITCHCOCK PRESENTS and started to recognize stories, and thought it was Bradbury, and there in the credits Bradbury DID script some of the teleplays.

"So Died Riabouchinska" was on Season 4 -- though I searched -- I can't tell if the teleplay (R. Bradbury) was first or the story is out there and published before the tv one, but it was a rather weak episode, I feel.

-- I gather it was a magazine publication, 1953. And it seems to be also in
'Masterpieces of Mystery and Suspense' (Martin Harry Greenberg, editor) from 1988.