And the Winner is: Naomi Hirahara #Edgarmemories #edgars2017

In 2007 SNAKESKIN SHAMISEN by Naomi Hirahara won the Edgar for Best Paperback Original. 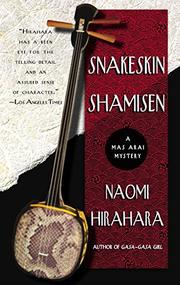 Mas Arai’s probe of a restaurant murder stretches back 50 years to old secrets.
Elderly gardener Mas Arai (Gasa-Gasa Girl, 2005, etc.) attends a party for lawyer friend George “G.I.” Hasuike at Mahalo, a Hawaiian restaurant in Torrance. Randy Yamashiro, who’s throwing the bash, calls G.I. his good-luck charm after winning half-a-million dollars on a Spam slot machine during the pair’s recent trip to Vegas. Curmudgeonly Mas is pleased to meet Juanita Gushiken, G.I.’s fiancée, but takes an instant dislike to brash Randy and leaves the party early, just after G.I. and Randy get into an alcohol-fueled fight that threatens to end their friendship. An oblique message from Juanita brings Mas back to Mahalo, where Randy’s been murdered. For obvious reasons, G.I. is the prime suspect. So reluctant Mas is drawn again into a murder investigation. At least this time he has a partner—assertive Juanita insists on helping to find the killer—and a big clue: the unique three-stringed instrument of the title found near the body. Mas’s collaboration with Juanita sparks some amusing friction. It’s easy to trace the shamisen to distinguished attendee Judge Parker, but not so easy to link him to the murder. The answer lies in a crime from the ’50s and some painful postwar memories.
Hirahara’s complex and compassionate portrait of a contemporary American subculture enhances her mystery, and vice versa.
Posted by pattinase (abbott) at 7:00 AM