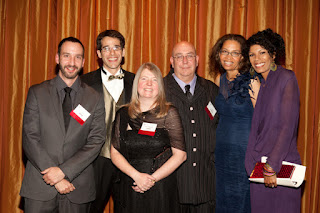 The Secret Life of Ms. Finkleman

Ben H. Winters, Harper,
Winters builds a fast-paced, funny, and highly original story on the premise that a drab music teacher—"so totally unremarkable as to be essentially invisible"— might have a secret past as a famous punk rock star. The main character, seventh-grader Bethesda Fielding, sets the plot in motion when she supposedly uncovers Ms. Finkleman's secret, but numerous other characters are fleshed out nearly as strongly. Winters moves with facility from one point of view to another, providing just enough background and detail on each to keep readers informed and engaged. When Ms. Finkleman, her former life apparently revealed, is instructed to prepare a rock-and-roll concert for a music competition, instead of the 16th-century English ballads she favors, the story takes some unusual twists, a few of which are kept from readers, adding more suspense. Winters (Sense and Sensibility and Sea Monsters) keeps tight control of the inventive material, ensuring that the unpredictable developments hit with a zing; his confident handling of an unusual mélange of elements will entertain readers with a wide range of tastes. Ages 8–12. (Oct.)
Posted by pattinase (abbott) at 2:00 PM