And the Winner is: S.J. Rozan #Edgarmemories #edgars2017 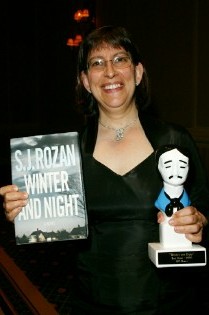 *Starred Review* Lydia Chin and Bill Smith remain one of the very best private-eye duos in the genre, and this installment of Rozan's highly readable and most entertaining series lives up to the superlatives we have heaped upon its predecessors. When Bill receives a call from the New York City police telling him that his teenage nephew, Gary, is in jail and has asked for him, Bill is certainly surprised, especially because he has had no contact with his sister, Gary's mother, in some time. When he manages to get Gary released into his custody, the boy will not say why he has come to New York, only that he has something important to do. Bill insists that Gary must call his mother, but Gary, a football player, smashes out a window, drops two stories into the alley, and runs away again. Thus begins a truly tangled tale that leads Bill and Lydia into the world of Gary's hometown, a New Jersey suburb, where high-school football rules the community--and may have led to the murder of a young girl by a team member who just might be Gary. The course of events also forces Bill to reveal to Lydia the truth about his own troubled past and why he so desperately needs to find and help Gary. As before, Rozan delivers strong characters, deft plotting, and a hard-driving narrative. We'll say it again: don't miss this one. Stuart Miller