And the Winner is: Stephen Gaghan #Edgarmemories #edgars2017 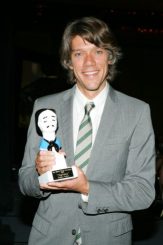 In 2006 SYRIANA, by Stephen Gaghan, won the Edgar for best screenplay 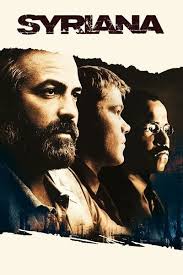 (From David Ansen at NEWSWEEK:
There were more than a few moments in the complex, fascinating "Syriana"--writer-director Stephen Gaghan's globe-hopping sociopolitical thriller about the oil industry--when I was confused, not quite sure who was plotting to do what to whom, or why. There's a method to this murkiness, it turns out. Like the myriad schemers in the movie--oil-rich Arab princes, Texas entrepreneurs, CIA operatives, Islamic fundamentalists, Washington lawyers, Justice Department investigators--Gaghan uses misdirection to achieve his goals. He takes us into a world that's built on moral quicksand, where the good guys act like bad guys and the bad like good, and everyone has perfectly good reasons to do the terrible things they do. And when the pieces come together and clarity is finally restored, what you discover can make your hair curl.
As he did in his Oscar-winning screenplay for "Traffic," Gaghan shuffles multiple stories, often continents apart, only gradually unveiling how they're connected. There's an Arabic-speaking CIA agent left out in the cold by his handlers in Washington, played by a bearded, heavyset, deglamorized George Clooney. There's an ambitious Washington lawyer (Jeffrey Wright) investigating a questionable merger between two Texas oil firms--that want drilling rights in Kazakhstan, and the powerful boss of the law firm (Christopher Plummer), who insinuates himself in the power struggle between two heirs vying to become the emir of a Persian Gulf country. One of those princes (Alexander Siddig, an actor to watch) has given his country's drilling rights to the Chinese, which makes him an official enemy of the U.S. government. Yet his new adviser (Matt Damon) is an American oil consultant, based in Geneva, who's parlayed the tragic death of his son at the emir's Spanish home into an economic opportunity. At the bottom of the socioeconomic ladder is an unemployed Pakistani migrant oil worker (Mazhar Munir) who's taken under the wing of a radical Islamic mentor.
The movie is partly (and loosely) based on the exploits of CIA agent and author Robert Baer, the model for Clooney's character. Gaghan did massive research before writing, and you can feel it in the dense, information-packed texture. In its suspenseful two hours, "Syriana" packs in enough material for two movies. Sometimes you wish Gaghan would simply slow down and let us linger awhile with his characters. What we get instead are merely tantalizing glimpses of their fraught home lives: Clooney's unhappy son, tired of being shuffled around the world; Wright's alcoholic father, who keeps showing up on his doorstep.
Gaghan's movie doesn't play by conventional Hollywood action-movie rules (when it tries to, in one action scene near the end, it can sacrifice sense for sensation). This is a movie that sticks its political neck out, that throbs with dread, paranoia and outrage, that doesn't coddle the audience by neatly tying things up. "Syriana" demands both an alert mind and a stout heart, and not just for its powerfully unpleasant torture scene. Its dark, dog-eat-dog vision of the world we live in may give you geopolitical nightmares.

I had a similar reaction, Patti, but I was reading Baer's memoir at the time, and that helped me understand.

This review is not mine,.