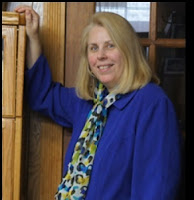 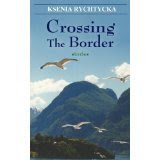 Ksenia Rychtycka was in a writing group I once belonged to.She brought an entirely new landscape to us each month with vividly realized characters in her writing. Her work felt European. Every story was polished, gem-like. It was fascinating to learn more and more about her Ukranian roots, the food and customs of her people, the relatives still there, the ones that came to the U.S. to earn money to send home, how things had changed there after the end of their domination by the USSR.
I asked her to talk about her stories.

What border are you referring to in the title of your collection of stories?

I came up with the title Crossing The Border because it works on many levels : the characters in my stories are 1. physically relocating (some temporarily/some permanently) from one country to another (Ukraine to the United States and vice versa, and in one story Greece/US) and 2. also emotionally and psychologically – they’re crossing barriers/borders within themselves  to achieve some sort of closure or move on to the next step/phase  in their lives. So it's not like there's only one specific border.

Your writing always feels very European to me: the style, the characters, the pace. What writer has had the biggest influence on your writing?

Wow -- that is a tough question and I honestly don't think there is solely one writer. In terms of this collection I was really influenced by these story collections:
Arranged Marriage by Chitra Banerjee Divakaruni
Krick? Krak! by Edwidge Danticat
Interpreter of Maladies by Jhumpa Lahiri
These books came out after I had already written a couple of the earlier stories but they were so helpful in showing me how it was possible to interweave cultural identity and history for an American audience. They also gave me confidence to keep moving forward with my own stories.

Do you expect the terrain and characters of your stories to change over time? Can you picture yourself writing a story with no immigrants, no European countries, no borders? America is a hegemonic culture and I wonder if it submerges voices that struggle to remain true to themselves. I guess it comes down to this: is the voice in your head the same as when you began to write?

That is a very interesting question that you are posing! At this point in time I don't see myself completely moving away from my Ukrainian background in my work. When you read Lahiri's prose or Divakaruni's, you are still getting large elements of their cultural background past their first books. So I don't know that I could completely separate myself from that simply because I'm still very connected to my cultural background. My husband is from Ukraine, I speak Ukrainian to my mother, we celebrate Ukrainian traditions, etc. Perhaps if I lived in an isolated community without the cultural diversity of a big city it would be different. What I think may change is the subject matter that I address -- I don't plan to write more stories about the early years of the post-Soviet era or even the current situation in Ukraine but I think that in some way there will be elements of my background within my work.

Why did you choose to end the collection with the 2004 Orange Revolution?

I wanted the book to end on a positive note, during the great moment of possibility for change. Although events in Ukraine have not gone the way many people had hoped, it was still an amazing and breakthrough time. I also had left Ukraine a few years before the Orange Revolution, and I felt that this was a good stopping point and that the stories worked together as a cohesive whole.

What are you working on next?

I'm currently writing poems and have a project in mind about four medieval historical women who were sisters. This may or may not turn into a prose piece.
Posted by pattinase (abbott) at 8:00 AM

This sounds really interesting. I am a big fan of Jhumpa Lahiri's books and agree she still writes of her Bengali roots. I will definitely check this one out.

What an interesting interview and perspective. I think the idea of crossing a border, physically and otherwise, presents such a great opportunity for creative exploration.

I live on the U.S.-Canadian border so border crossings are common...and jarring. Like Jeff, I'm going to check this out.

Oh, this is really interesting! Thanks for profiling this book, Patti!