Forgotten Movies: A DAY OF THANKS ON WALTON'S MOUNTAIN 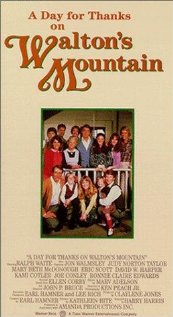 Although I would  not have made a reunion film without Richard Thomas as John Boy, the actor here does a fairly good job of playing him. Everyone else, save Grandpa, is here (1982), a year after the show was cancelled. The children are grown. But the good feelings remain. They did another one a decade later, which I have never seen.

I am glad the Waltons are still around on a cable station. We need shows like this to remind us you can be religious without being censorious, intolerant and excluding. Will Geer and Ralph Waite had a lot to do with that, I think. When I think of a Christian role model, I think of Olivia Walton.

Sad that none of the kids went on to something else but that rarely happens.
Posted by pattinase (abbott) at 7:00 AM

Patti - Your post reminds me of the original series and the Earl Hamner novel. Both were an important part of a lot of people's growing-up years.

Amazingly, the only mainstream show on TV today where Church-going is a regular part of family life is THE SIMPSONS. The minister, Reverend Lovejoy, is even a recurring character.

I really liked the first few years of the original series. They had an occasional grittiness appropriate to the Depression-era setting. Just a well-written, well-acted series.

I never could tell the kids (except for John-Boy) apart. For me, the attraction to the series was Will Geer. And the elderly sisters with their family "recipe".

John Boy, Jason, Mary Ellen, Erin, Jim-Bob, Elizabeth--and the one I always forget...Ben. Like with the Seven Dwarfs. Happy, is it?
In some show, they mentioned going to church recently and I realized how rare that is.
I never watched it much after John-Boy left and the others started to grow up. It lost something despite adding new kids.

Jackie was a huge fan of The Waltons and watched this one recently. Granted, it's not the same without the "real" John Boy. Richard Thomas and Ralph Waite have certainly kept busy since. We've seen the former on Broadway a couple of times.

Mary Ellen tried to help her career by posing naked in Playboy but it didn't help. Jason is a talented musician (as he was on the show) and has worked with many famous names. Ben owns a parcel delivery service in L.A. Erin has lupus, she claims from leaking breast implants. She is acting again. Jim Bob makes occasional appearances but has given up acting, and Elizabeth is the principal of a charter school.

Or so says Wikipedia.

Oh, by the way, in case you never saw the original TV movie pilot before the series started, most of the "older" characters were played by different actors. Patricia Neal and Andrew Duggan were Olivia and John (only in it at the end), and Edgar Bergen was Grandpa. Only Ellen Corby was the same.

Patricia Neal played it differently indeed. Much more the rough-hewn mountain woman if I remember correctly.

Though before the pilot (or at least the telefilm, THE HOMECOMING, that THE WALTONS was spun out of), there was the theatrical feature from the source novel of the same title, SPENCER'S MOUNTAIN.

The early, better seasons of THE WALTONS were much appreciated by me at the time.

Patricia Neal wrote in her autobiography that she took the part because Olivia was the name of her daughter who died. She also said she would have been glad to play the role on the tv show, but she was never asked.

My Mum used to watch it and call it her little dose of weekly goodness.

Earl Hamner is such a true American writer. Wholly apart from the gravitas on display in the video clip are his episodes for The Twilight Zone. They are among my favorites from that series. They fascinate me with their focus on American folklore, superstitions of the Eastern mountain states, and his complex country characters. All of those episodes are imbued with a sublime eeriness that somehow can only come from rural America.

I think she wouldn't have gone well with Ralph Waite. Too overpowering.
I guess HUD will always be with me.
Always felt fresher for watching it too.
I didn't know he wrote for TZ. I am familiar with Spencer's Moutain though. A bit of a different feel to it.

We watch "The Homecoming" every year about now... John trying to get home through a big storm, ad a Robin Hood style turkey thief. I's a good one.

We also have the first season or two on DVD.

Another side comment: the actresses who played the Baldwin sisters, Helen Kleeb and Mary Jackson, lived to ages 93 and 95 respectively.

I wonder if it was "the recipe."

Yeah, Hamner was the TWILIGHT ZONE guy who was closest in appeal to Manly Wade Wellman...but Wellman remains the more powerful writer.

Hamner had more control over the later projects than he did with SPENCER'S...

Neal, and cinematographer James Wong Howe, made HUD in a way that no one else involved did. Everyone else was fine or serviceable, but their contributions were brilliant.

Saw it back in the day. I always kind of liked the WAltons

I remember really liking Hamner's novels YOU CAN'T GET THERE FROM HERE and FIFTY ROADS TO TOWN. I ought to reread them someday and see if they hold up.

As far as HUD goes, one of my English professors in college had Larry McMurtry in his short story class many years earlier, and as an assignment for that class McMurtry wrote the short story that became his first novel HORSEMAN PASS BY, which became the movie HUD. We heard about it the entire semester.

That would be hard to compete with!!