Philip Roth Throws in the Pen after NEMESIS 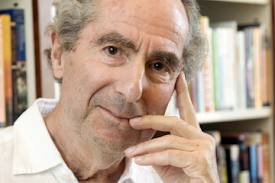 I have read more than half of his output, I guess. My favorites are AMERICAN PASTORAL, NEMESIS, and GOODBYE, COLUMBUS.  Not such a fan of the Zuckerman saga though.

And he never really wrote strong female characters. His women tend to be nagging mothers/wives, revolutionary daughters, fickle college girls, characters who remain in the background despite being on the page a lot. I am not sure that he hates women as much as he finds them uninteresting, unknowable, non-players.

How about you? Any Roth fans out there?

Goodbye, Columbus
The Plot Against America

It's his attitude to women I can't get beyond--they alternate between shrewish harpies and nubile sexbots. Never a real, complicated woman.

I don't think we should necessarily draw a parallel between how a man writes and his own life, but in this case from everything I've read about his relationship with Claire Bloom it does sound like he's a pretty miserable character.

Am I a fan?! You bet. Even though Roth did ruin my life. When I was 15, the library allowed my to check out a copy of Portnoy's Complaint. There's a scene in there where Portnoy masturbates with food from his mother's refrigerator. When MY mother found the copy of the book in her home she went haywire. It was the beginning of the breakdown of our relationship. I never really trusted her again for freaking out like a witch over a book that i didn't KNOW had that scene in it until I read it) and she never trusted me again for knowing I had an interest in a degenerate writer like Philip Roth. Books sure can put the FUN in family dysfunction!

I read that too, Jeff and I have to say I never saw him the same way again--although I continued to read his books. (Mostly)
I had that same experience with FROM THE TERRACE, Elaine. My Dad tossed it and I never understood how he had even heard of it since he never read a book.

Never completed anything by him.

Charles-if you come back, you might like THE PLOT AGAINST AMERICA which is an alternate history and lots of fun to read.

I used to be a big Roth fan. My favorites were Patrimony (a non-fiction book about living with his father as he is dying), American Pastoral, and Goodbye Columbus.

I haven't read Roth, and everything I've read about him has put him on the backburner of heavyweights I should probably get around to reading.

As for current writers, Greg Rucka writes fantastic women characters. He's probably best known as a writer in comics (check out his Stumptown collection), but his espionage novels are also top shelf.

Like you, Patti, I've read about half of Roth's novels. I have them all and I'm working my way through them at the rate of about one per year. Thomas Hardy knew how to write about women. Mailer's Nicole in THE EXECUTIONER'S SONG is the most fully realized woman written by an American writer that I know about.

Patrimony was very good. I'd forgotten his memoir type books.
Try NEMESIS, Chris. It is short, and very touching.
Thomas Hardy certainly did. Henry Miller wrote about women a lot but I am not sure how accurate it was. It's been a while.
Rucka, huh. Will check him out.

Reading Roth's OUR GANG in my fifth grade classroom got me some unwelcome teacher attention, but nothing nearly so traumatic as Elaine Ash's exprience. Probably the right age for that novel.

Younger male writers are less likely, usually at least, to find women alien creatures, I suspect. Joanna Russ praised John Varley's work in the '70s thus, and she was a tough judge...William Kotzwinkle, Joe Lansdale at times (given his stylization), and to go back a ways Theodore Sturgeon at times I think did the trick better than most writers (one of Russ's points was that all writers were still grappling with how to portray women fully, since there was so little earlier model to draw from). I find it hard to believe that Mailer would've pulled off the trick particularly well, but haven't read THE EXECUTIONER'S SONG and will take your word for it till I do, George. (Henry Miller and Anais Nin weren't too interested in well rounded so much as fully packed...)

For my money, THE EXECUTIONER'S SONG is Mailer's best book (and I've read a lot of Mailer, more than Roth). Gary Gilmore's girlfriend, Nicole, just jumps off the page, Todd.

I remember that book knocking me out when it came out. And the movie was nearly as good. Really scary stuff. Tommy Lee Jones hasn't gotten to play enough roles like that one.

I have to wonder how much it helps to have talked with the actual person one is portraying in the novel....

I haven't read as much Mailer as George I'm sure but I totally endorse his sentiments about The Executioner's Song - a great book by any standard.

I'm with you, Patti ... not a Zuckerman fan but the rest were wonderful. American Pastoral remains my favorite.

The Roth-mania never really reached out to me. Not that he's not talented, but I especially dislike the type of novel we're supposed extract irony from, like it was food for the gods.

I don't like his irony and I don't like his whiny male characters who feel castrated. I'm not the most knowledgeable person on Philip Roth, so I won't rant three pages on him, but I never liked what I read. It's sad though that he calls it quits. Not sure what he's supposed to be now, except a stereotypical grumpy old person

You may have had to grow up on him. Been there for those first books, watch him sour, then, of late, turn out some pretty good books. American Pastoral and Nemsis are eons from the Zuckerman saga. His description of making gloves in Newark is one I will never forget.

Photos available on your site even though producing attention rapidly some quantity submits. ยูฟ่าสล็อตบนมือถือ รีวิวufaslot

Wohh just what I was looking for, regards for posting. วิธีเล่นเว็บUFASLOT รีวิวเว็บufaslot

We help them as much as we can. If they need assistance with research, writing, grammar, formatting or proofreading, we provide our assistance to help them build their career. ufacasinoดีอย่างไร คาสิโนออนไลน์UFABET

I conceive you have noted some very interesting points, regards for the post.
รีวิวเว็บพนันeBET

This is a great web site, Good sparkling user interface and, very informative blogs. thanks. You may check our website also
สมัครufabetเว็บตรง
เดิมพันยูฟ่าเบทบนมือถือ

Photos available on your site even though producing attention rapidly some quantity submits.
สูตรสล็อตออนไลน์
รีวิวUFASLOT
เกมสล็อตออนไลน์บนมือถือ

I went to this website, and I believe that you have a plenty of excellent information, I have saved your site to my bookmarks.
โปรโมชั่นยูฟ่าสล็อตบนมือถือ
เดิมพันสล็อตUFABET
เว็บพนันสล็อตออนไลน์

This is a great web site, Good sparkling user interface and, very informative blogs. thanks. You may check our website also
เว็บพนันUFABET

We provide best services to all class of clients. สมัครufabetเว็บตรง

I value the article.Thanks Again. Much obliged.
เว็บพนันออนไลน์UFACASINO
เว็บเดิมพันUfacasino
รีวิวเว็บคาสิโนUFABET

I conceive you have noted some very interesting points, regards for the post. แนะนำเว็บยูฟ่าเบท .

This is a great web site, Good sparkling user interface and, very informative blogs. thanks. You may check our website also ยูฟ่าเบทขั้นต่ำ10บาท