My Life at the Theater: ONE TOUCH OF VENUS 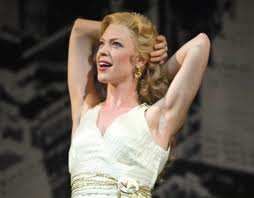 We saw this episodically charming musical at the Shaw Festival at Niagara on the Lake in 2010. The show was written by Ogden Nash and S.J. Perelman, with the music by Kurt Weil. The clip above is from a Broadway version. It has also been made into a film with Ava Gardner. The book isn't particularly riveting but a lot of the music and staging was fun. It's the story of the goddess, Venus, brought to life.
For musical theater lovers, there are some lovely songs.
Posted by pattinase (abbott) at 7:30 PM

Patti - Oh, this one's a show I've never seen 'though I've wanted to. Glad you had fun.