Directed by Stanley Donan in 1978, three movie genres of the 1930s are satirized in this spoof of the traditional double feature. In "Dynamite Hands" a delivery boy turns prizefighter in order to raise enough money for his kid sister's eye operation. Later, however, he turns his back on his father-figure manager and librarian girlfriend when he is distracted by a flashy gangster and sexy night club diva. Intermission has a coming-attractions trailer for "Zero Hour," a World War I aviation drama. In the second feature, "Baxter's Beauties of 1933" a Broadway impresario hears he has only a month to live and is determined to mount one more hit on the boards. When his drunken diva of a star cannot go on opening night, he finds that the ingénue he chooses to replace her is his long-estranged daughter, whom he has not seen since she was a girl. All three stories feature the same cast. 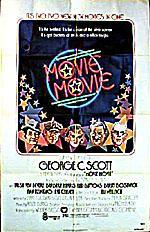 It may not have been a great movie but it was a fun one.
Posted by pattinase (abbott) at 7:00 AM

Fun for sure. I liked it a lot.

Funny you mentioning this one as I've been thinking about it lately. We saw it at the old Waverly Theater in Greenwich Village.

Certain lines stand out in my memory, as when the sister whose eyesight is failing tells Hamlin he doesn't have to fight to get the money for her operation. "That's OK, Joey. I've seen enough. I'll remember."

Also, at one point Scott talks about having "a conniption fit" which cracked me up because that's a phrase my mother used to use.

The boxing movie, a spoof of Clifford Odets's GOLDEN BOY (and others of that genre), was definitely the funnier and more memorable half to me.

(An aside: Hamlin's sister was played by Kathleen Beller, whose most memorable career moment for me was standing naked - or was it just topless? - on the diving board being ogled by Laurence Olivier in THE BETSY.)

George C. Scott, an important actor at the time, seems to have faded into near obscurity today. A shame.
Yes, the boxing movie worked better although I am sure there are fans of movie musicals who would dispute it.

I enjoy parodies, although I don't now how you could make a boxing movie that didn't seem like one. They are all the same to me, with maybe the one exception of RAGING BULL...On a related note, we have been noticing how often movie and TV scripts require actors to say "Are you sure?"

Just shows to go ya.

I have to see this one. Thanks for the write up!

Jeff--Beller can still be seen in full frontal glory taking her swim courtesy one of the online clip services (probably DailyMotion). The only bit of THE BETSY worth seeing (it certainly made an impression on me when THE BETSY hit cable, and I was a few years younger than Beller was at time of filming), unless one wants to compare Olivier embarrassing himself here with his similar work of sorts in INCHON.

Yes Todd, that was my take too - THE BETSY was bad but that scene was very, very memorable.

OK, I just checked (for reasons of fact checking, you understand) and it was Tommy Lee Jones rather than Olivier watching her naked swim.

Glad I could clear that up.

Olivier watches Katherine Ross breast feed her child, then jumps into bed with her. Blech!

Haven't seen this one in at least a couple of decades but I loved it at the time and thought it was a splendid idea - but then I was always a sucker for Warner bros movies of the 30s - great choice Patti, thanks.

This is one that I clearly have not had on my radar. I will try to catch up with it one day :)

This google chrome store gadget is indispensable for computer users. And you can choose the showbox official manufacturer's showboxvpn to view and update the latest movie now!

We provide best services to all class of clients แทงบอลไทย

Great tips and very easy to understand. This will definitely be very useful for me when I get a chance to start my blog

Photos available on your site even though producing attention rapidly some quantity submits. ยูฟ่าสล็อตบนมือถือ รีวิวufaslot

Wohh just what I was looking for, regards for posting. วิธีเล่นเว็บUFASLOT รีวิวเว็บufaslot

We help them as much as we can. If they need assistance with research, writing, grammar, formatting or proofreading, we provide our assistance to help them build their career. ufacasinoดีอย่างไร คาสิโนออนไลน์UFABET