Say Something Good about Detroit: HOORAY FOR lOVE AND THE CADIEUX CAFE

This is a resurrection of MY TOWN MONDAY, which I always felt guilty about giving up. The title borrows somewhat from a novel set in Detroit by Scott Lasser. I invite any Detroiter out there to write a piece for this series. 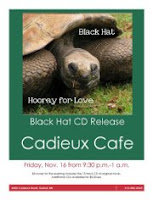 On Friday night we attended a CD release party for two friends of ours and their band at the Cadieux Cafe. The CD is called HOORAY FOR LOVE and the music is sort of a bluesy-rock.

The Cadieux Cafe is in Detroit, about three miles from our house.It offer featherbowling, steamed mussels, more than a dozen beers from Belgium. As the bumper sticker on the wall says, "It's Beautiful To Be Belgian." Since its days as a Prohibition-era speakeasy, the Cadieux Cafe has been a social hub for metro Detroit's Belgian population, much of who settled in this area. Flemish culture flourishes at the Cadieux, which is or has been the unofficial headquarters for an array of clubs promoting pastimes from across the pond, including pigeon racing, archery, bicycling, darts and, of course, feather bowling. The Michigan Traditional Arts Program awarded the Cadieux the Michigan Heritage Award for "continuing family and community cultural traditions with excellence and authenticity."

The Cadieux Cafe has been owned by the Devos family since the '60s, with a new generation taking over 10 years ago. They've been careful to maintain the place's old-world charm and traditions, but they've also made it more accessible to the masses -- particularly the 21-35 year-old demographic -- by bringing in live musical acts and staying open until 2 a.m. daily. It's still beautiful to be Belgian at the Cadieux Cafe, but you're more than welcome to pretend.

The Black Hat, the band we went to hear, is the love child of Frank.Koscielski, who in his spare time is a labor history professor at Wayne State. Many of the lyrics to the songs are written by Caroline Maun, a poet, English professor, Frank's main squeeze, and a beloved member of my writing group.

Frank suffered a nearly fatal motorcycle accident last year and much of the inspiration for this CD came from that experience. Michigan now allows riders to drive without helmets. Frank would have died had he not been wearing one. 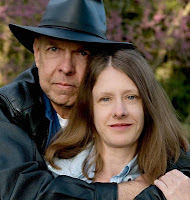 Do you have a place like the Cadieux Cafe in your city/town?

Glad he was wearing a helmet. I always wore mine.

He is not riding a bike anymore.

Patti - Oh, this sounds like a great place! So...full of life. And nice to see My Town Monday back.

No place like this locally that I'm aware of. There are some interesting restaurants around the local college campuses, though.

I dont' go out enough anymore to answer this question with any specific examples. Chicago, however, is filled with family owned cafes and bars that have live music. We also have a few authentic Belgian joints, too. Our favorite is Hopleaf which serves food (some of it authentic Belgian cuisine) and has a ridiculous amount of beer for sale (Belgian, European and domestic). They were way ahead of the craft beer trend before it was trendy. They also serve french fries --er, pommes frites, that is-- the Belgian way: in that nifty metal basket with a side of mayonnaise! This is a preference Joe learned to like when living in Belgium back in the 80s and one that I have picked up since.