How I Came to Write This Poem/Story 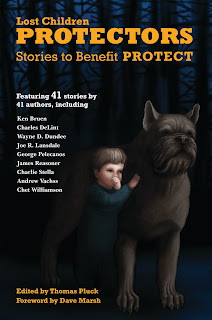 I wrote "Hushed" this past February, after Thomas Pluck invited me to contribute to the PROTECTORS anthology. The poem is narrated by an older cousin who is jealous of a younger one until he sees bruises on the boy's arm.

It was sparked by a years-old memory of seeing bruises on my own cousin's arm. When I asked him how the bruises happened, he wouldn't tell me, and he was very scared I might tell someone else. I had heard rumors his father was abusive, but unless he admitted to the beating, no one would believe me--especially since our relationship as children was contentious.

My cousin and I are on good terms now. He's married, has a good job, and owns his own home. If the rumors I still hear about his father are true, I would have turned my back, but my cousin is more compassionate, so his father remains an albatross.

I'm glad to turn this bad experience into a poem that will go to protect children. I'm also glad to tell you how my cousin is doing now. Thank you, Patti.

In Dreams was lifted from the MFA thesis I’m writing, a fictional memoir currently titled The 2nd Coming.  It has been edited down and names have been removed.  As best I can remember it, it is a true story.  I never considered writing about this particular experience until I began writing the fictional memoir for school last semester.  I had already changed my thesis twice after two semesters.  Although I had tried many times to write about some of the more painful issues from my past, especially in theatre form, I could never sustain anything long enough to feel comfortable continuing.  After reading Bright Lights, Big City, by Jay McInerney, I tried second person and found I could finish what I had started.  It remains a work in progress, but much more developed with each passing opportunity to settle in and write.  I’ve already gone beyond the word count requirements for my thesis, but why let that stop me (said the SOB arrogant enough to title a memoir, fictional or otherwise, The 2nd Coming)?  It is nothing profound, that’s for sure, but there’s a nuthouse stay and some unfortunate family dynamics that are sometimes sad and often funny.  The fictional memoir will cover birth to a first wedding at the age of twenty-one, with occasional projections into the future.  It touches on the influence of religion in a somewhat irreverent family, growing up in the racial hotbed Canarsie was during the late 60’s/early 70’s, a Mob influence within family, and ultimately the collapse of family.  And, yes, the current title is as ironic as it reads.
Charlie Stella


CHECK OUT MY REVIEW OF THE MASTER at Crimepree Cinema.

Patti - Thanks for hosting Gerald and Charlie.

Charlie - Isn't it interesting how trying different kinds of writing can open one up creatively? Thanks for sharing your story.

Margot, yes, definitely. I'm currently working on a critical essay about Richard Yates for school and have been researching pretty much everything I can find. One thing was a wonderful critical essay written by a woman who specifically challenges the publishing industry for abandoning (more or less) third person omniscient, what Yates almost exclusively used. She was very adamant about writers experimenting and ignoring the dominant voices for the sake of publication. Here's the link to Ms. Wagner's essay: http://www.lycoming.edu/schemata/documents/ENGL333_Wagner.pdf

Mine focuses on Yates use of 3rd person omniscient specifically; a telling from on high that permits the author to set atmosphere, expose the core of a character’s being, and ultimately impose judgment on them.

As for 2nd person, although it's pretty much shunned across the board ... the day I pay attention to the board is probably the day my beloved New York State Buffalo Bills win a super bowl ... I simply couldn't handle most of what happened growing up in our whacky home in any other voice (including through dialogue in theatre attempts).

Thank you, Margot. I find even the grittiest fiction has a safety net poetry doesn't necessarily have. I changed names in the poem, but it expresses what I felt in the moment.