When Minor Characters Threaten To Sabotage a Show. 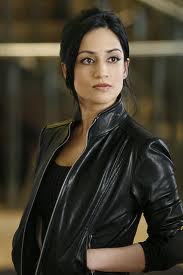 At first, Kalinda seemed like a great character on a great show. But over four years, her past, (referred to often) was still too murky and I began to lose interest. Strutting around only goes so far. And this year, with the addition of a sadistic husband, I dread seeing those black boots walk down the hall on THE GOOD WIFE. IN a TV show that manages to be lucid about other issues, why this enigma,

The supporting character problem is a potent one. If you don't develop them somewhat, there is not enough interaction on a TV show-or you lose all interest in them. JUSTIFIED has not done very well by Winona for instance. If you blinked last season you missed her. Marie got very little airtime on BREAKING BAD this year. And Betty Draper has pretty much signed off. (And what do these characters have in common?).

Now Kalinda's storyline is both underdeveloped and referred to too often. I have read several articles about this recently so I know my frustration with it is shared.

What supporting players should have been developed more on a TV show you like? Which ones less? Who is the best supporting character in TV history? If you watch THE GOOD WIFE, should they pull the plug on Kalinda's back story or do you still care?
Posted by pattinase (abbott) at 8:36 AM

Personally, I was glad Winona didn't show up much on Justified last season. I've never much liked her.

Yeah, I must agree. Kalinda's character is starting to get tiresome.

Often supporting characters if not fleshed out by a talented actor will always get the boot. It's not always on the page. Actors need to add something to give characters life. Cameo bits and supporting roles in the hands of a gifted imaginative actor - whether man or woman - can steal a show. I see it on stage and I see it on TV and the movies all the time. Kathryn Joosten's neighbor on DESPERATE HOUSEWIVES, Bronson Pinchots's bizarre and hysterical bit role in BEVERLY HILLS COP, Elaine Miles as Marilyn, the secretary, in NORTHERN EXPOSURE are three that come to mind immeidately. It's all in the actor's performance in each case. I don't watch THE GOOD WIFE but I take one look at that still of the actress playing Kalinda and see a fashion model -- great make-up and hair and a woman who knows how to wear clothes, but dead eyes and nothing much going in the face. Bad casting, I'd say.

Yeah, Winona isn't that interesting to me either...

You know, as I thought of my favorite TV shows, I realized that most supporting characters are not a whole lot more than plot devices.

DOCTOR WHO does a decent job with the companions.

I guess they're all 'supporting' for a reason...

And now that I think about it neither is Betty Draper. But some characters might blossom from more air time. Although having said that I always dreaded Cheers episodes about Carla, Cliff or Norm. So maybe less is more in most shows. And definitely less of Kalinda.

Frankly Kalinda doesn't annoy me as much as Eli and the election story. I don't care about Peter's campaign and every time Eli calls Alicia to whine about something I want to fast forward.

I am tired of Eli Gold too. I am also tired of Jackie Florrick. Maybe it has jumped the shark.

Hm. I take the Kalinda subplot as she is very representative of the type of personality who emerges from an abusive youth, and her husband is the kind of lover that has her number as a result, not least because she resents as well as finds familiar his attempts to control her. Note her abruptness with all her other paramours, after being all cuddles with them at other times. This strikes me as Much more believable, uncliched and not groan-inducing than, say, the Draper gathering making a big point of scattering their picnic trash to the wind. Jackie Florrick is a bit more convenient for story purposes, but I have certainly known people as "well-meaning" as her...she is the major intrusion of MAD MEN-style plot-convenience characterization, but they have such fun with her, and her current post-stroke damage seems interesting to me, along with the relative subtlety that her distress with her realizing her own damage is portrayed.

And the election subplot is a hell of a lot closer to politics as it is than such overpraised items as THE WEST WING (or its pendant, THE NEWSROOM, which at least is getting called on its gaping naivete...).

So, no. I'm not bothered yet. The worst thing about the series as far as I'm concerned is the tendency for the daughter to be conveniently stupid at times. Doesn't fly, by me, as adolescent rebellion and/or oats sewing.

Ed Norton and Eddie Haskell are my favorites.

I pretty much agree with Todd's assessment of Kalinda.

Jackie is awful but we got a kick out of seeing her in two recent shows on and off Broadway. she played French in the most recent revival of Follies, singing and dancing. She played British convincingly off Broadway.