This 1992 documentary, directed by Joe Berrlinger and Bruce Sinofsky, broke the mold of what came before it because---well, listen to the director above. Up until this movie, documentaries were expected to have a POV and this one did not.

Four brothers live together in a shack in central New York. And when I say together, the four of them slept in the same bed and always had. When one brother dies, another is arrested. The townspeople come to believe that Delbert has been railroaded into a confession by the big-city cops. Certainly, he is mentally diminished and probably did not understand issues like waiving his rights. 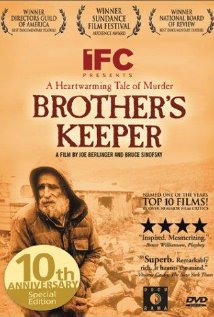 This film covers much of the trial, community meetings, even benefits the town held to raise money for Delbert's defense. You won't come away from this with any definite answer on why he was killed or by whom, but you will learn a lot about the people involved. It was a real knockout in 1992,

For more forgotten movies, see Todd Mason with the links.
Posted by pattinase (abbott) at 7:51 AM

Sounds amazing Patti - never seen this one I'm sorry to say. Thanks for the info. Unfortunately it doesn't look that easy to find (at least here in the UK).

I distinctly remember this one--both because of its groundbreaking nature and also because some felt the filmmakers were taking advantage of obviously mentally-deficient people. At the time, it was hard to believe that people still lived in such a ramshackle way. Oddly enough, 20 years on, I now have no trouble believing it.

Yes, the film makers were both criticized and lauded.
And the early nineties seemed very much more affluent than now.
It never moved beyond the art house crowd, I think, Sergio. And I bet a lot of documentaries never make it outside the country they are made in. Although this has universal appeal.

I've never heard of BROTHER'S KEEPER but now I want to see it pronto! Thanks for bringing this intiguing film to our attention.

I was fascinated by this movie. Saw it when it first came out. You're right, Patti, it was at our local art house cinema. What an amazing story. Proves once again truth is stranger than fiction. Creating a truly presentational unbiased documentary must take a lot of concentration in the editing room. What a masterful impressive feat. Got a lot of people asking questions and talking about the film when it was over.