What the Internet Has Brought to Me. 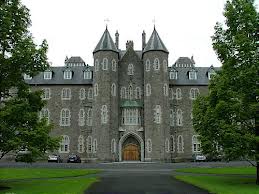 We just spent some lovely time with Rob Kitchin and his wife, Cora, in Maynooth, Ireland, home of the National University of Ireland. Phil was the keynote speaker at a conference Rob arranged on the American election and the high point for me was spending two lovely evenings talking most crime fiction with Rob and Cora.

I have been rather aggressive about trying to meet people I know via the blog community and this meeting worked out well for Phil as well since Rob is a university professor with many common interests. I have met many, many people at crime fiction conferences that I exchanged a few words with, but I especially treasure the people I have been able to spend more than a few minutes with.

Friends like Terrie Moran who made us so welcome in Florida when we were considering spending a winter there a few years back. Terrie is a person we struck an immediate rapport with-who wouldn't?

Or Sandra Scoppettone who traveled for hours to meet me for lunch in New York a few years ago. She has continued to give me advice and succor ever since.

People like Naomi Johnson who took an afternoon off to show me Columbus and take me to lunch. The same goes for Margot Kinberg and Barrie Summy out in San Diego.

Or Bonnie Lawson who shared coffee and book talk with me in D.C.

George Kelley and his wife, Diane, have met us at Niagara on the Lake for a play and bookstore visits and had dinner with us twice. Jeff and Jackie Meyerson have done that too as well as being our companions on trips to New York. A great tour of Brooklyn was part of the fun.

Cullen Gallagher has met up with us in New York and Philadelphia and is as charming as he seems online. Kieran Shea has exchanged Ocean City, New Jersey memories with me on more than one occasion.

Bryon and Becky Quertermous had us as guests at their lovely wedding and went to a play at the Purple Rose Theater in Chelsea with us. Vicki Hendricks shared a trip to the infamous Mutter Museum in Philadelphia as well as a dinner at the Mummer Museum at the last NoirCon. It was there we also met Scott Cupp.

We met Brian Busby last summer in Stratford and got a tour of his lovely B &; B in a neighboring town.

Megan's events in Michigan have introduced us to Heath and Kim Lowrance, Tribe and Carrie Roca, Mike White and a few others who names are eluding me now.

It is not my intention here to mention everyone I have met at every conference (or hunted down at other times) but just to point out the strange function the Internet has served. I would have met none of these wonderful people in the years predating the Internet. I would never have attended a conference if I didn't think I had a few friends there to spent time with.

Beware Internet friends. I may show up at your door next.

Making long term connections in this day of fast movement sometimes seems tough. Glad you have had a chance to link up with some of the good folks in our community.

You know the door is always open here, Patti. I'll even meet you at the state line and escort you in, if that would make you less nervous. Heh.

I will be in California for six weeks in January-February. How close are you?

Me? Not close at all. Though I do get down there fairly frequently.

Thanks for the memories.
You mean Montana and California aren't kissing cousins.

No. In fact, if you are going to LA or someplace like that, the drive distance for me is about the same to get there as it is to get to where you are now in Detroit City.

Hope we can meet up again.

gonna track you down, Ron.
Fleur-Megan will be in MS next year if you're still there.

just bring wine if you do.

What? No salt water taffy? And I never travel without wine and a corkscrew.

I have dearly enjoyed meeting you in person Patti. We'll have to get to another play soon.

You bet, Bryon. Keep you eye open for a likely candidate at Performance Network or Purple Rose.
I would love to come to Tacoma. Who knows?

Would love to meet Megan!

It would be great if you could make a Noir at the Bar in NYC. Todd Robinson and Glenn Gray have another one tentatively planned for December.

That would be nice, Al.