How I Came to Publish This Book: COME EASY-GO EASY/ IN A VAIN SHADOW 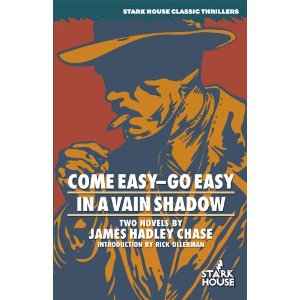 I first encountered James Hadley Chase when I was a teenager. The book was Dead Ringer, published in the U.S. by Ace Books in 1969. A woman in a dark bikini and vivid blue eyeliner sprawls across the cover. Blonde, dead and alluring. There’s a quote at the top of the page: “Far and away the best writer of thrillers in the English language.” The back cover suggests that the reader would be well served to check out Chase’s previously published No Orchids for Miss Blandish, which is precisely what I did. It hit me like a raw-boned fist.

A few years pass. By now I had collected quite a few of the old British Panther and Corgi editions of Chase’s books, with those slightly cheesy pin-up-girl covers. Also by now, Chase had become one of my guilty pleasures. I knew he wasn’t considered in the same realm as Chandler or Hammett, nor even mentioned in the same breath as MacDonald and Thompson. But by god, whenever I picked up one of his books, I was always hooked from the first page, and I always raced to the end, through all of Chase’s twists and turns, to see if the “hero” gets away with it this time. He hardly ever did.

Usually the Chase hero is a hapless scheming schmuck who gets what he deserves, but he usually has to go through hell to get there. Yeah, a real noir kind of a hero.

But Chase is something of an anomaly in the States. The author’s real name is René Brabazon Raymond, and he’s quite thoroughly British. However, he decided at the outset of his career to write American hardboiled thrillers. So, armed with a dictionary of slang, he cranked out books like Kiss My Fist, I’ll Get You for This, You’re Lonely When You’re Dead and Strictly for Cash. By the end of his career in 1985, he had only visited the U.S. a handful of times, mostly the East Coast.

In fact, one of the things that puts off certain American readers is the occasional British term amidst all that hardboiled talk. Chase set most of the books in areas like Florida and Los Angeles, so when you encounter a “boot” being opened in a “car park,” it jars you a little. But these little slips never get in the way of the story. They’re just there to remind you that Chase is not the American hardboiled writer that he seems.

Anyway, more years pass and it had been a long time since I had read one of my James Hadley Chase books. They just sat there on the shelf, tempting me, but there was always something else to read first. As the publisher of Stark House, I had been corresponding with a reader who turned out to be quite a Chase fan. He emailed me an annotated list of some of his favorites and suggested that if I hadn’t read them yet, I would be in for a treat. So I went on a quest of rediscovery. And discovered that he was right. There were some killer stories here, all of them out of print. Chase had written close to 90 books—perhaps I should consider reprinting two of them.

I got my Associate Editor, Rick Ollerman, fired up about it. He, too, turned out to be a Chase fan. Tracking down the agent who represented the Chase Estate turned out to be as simple as writing to House of Stratus, who had reprinted a bunch of Chase books in England. Chase’s son controlled the estate, and his literary agent was happy to consider my proposal.

So, what books to publish? A daunting task. It seemed too easy to reprint No Orchids and its sequel, The Flesh of the Orchid. I never seem to go for the obvious choices anyway. I toyed with the notion of bringing back some of the really obscure titles like Miss Callaghan Comes to Grief, Lady—Here’s Your Wreath or Blondes’ Requiem. But I finally decided to settle on one of my personal favorites from 1960, Come Easy—Go Easy, and pair it with one of Chase’s rare British mysteries, In a Vain Shadow, to offer a broad perspective of Chase’s work.

Pocket Books had made an attempt to popularize James Hadley Chase in the U.S. back in the 1970’s, and Come Easy had actually been reprinted by Pocket back in 1974. But those Pocket editions have become fairly rare. And In a Vain Shadow, originally published under the Chase pseudonym “Raymond Marshall,” had never been published here at all, with its last Corgi paperback edition dating from the late 1970’s.

The set-up for Come Easy—Go Easy is deceptively simple as any con-on-the-run story. A fellow gets involved in a botched theft, and is sent to a horrible chain gang prison. But he’s got a plan, and soon finds himself involved in a late night prison break. After the horrors of that situation, after our hero Chet has successfully escaped, he needs some place to hide out. He comes across an old guy who owns a diner and gas station in Nevada on the last stop through the desert. The old guy hires Chet as his assistant. But wait, Chase is only getting warmed up. Because the old guy has a sultry wife—well, of course he does—who seems to resent the hell out of Chet’s presence, and goes out of her way to be rude to him. And so it goes from there. I don’t want to give the whole book away, but suffice to say, the dust never settles on Chet for long. There’s a hell of a lot of conniving to come.

In a Vain Shadow involves a character named Frank who takes on a job as a bodyguard but is all the time trying to figure out how he can rip off a cache of diamonds from the guy he’s protecting. This one’s got a femme fatale, too. And nothing goes right for Frank. We read the story from his point of view and there’s always one piece of the puzzle that’s missing. There’s always something that keeps Frank from the treasure he feels should be his. Because try as he might, he can’t quite stay ahead of that femme.

And this is what I enjoy so much about Chase’s thrillers. He keeps me guessing. He keeps shifting the action around and taking it in a new direction. George MacDonald Fraser, author of the Flashman series, said once about Chase, “He just keeps me reading.” The critic for The Observer called him “insanely readable” and the New Statesman considered Chase the “master of the art of deception.”

The new Stark House edition of Come Easy—Go Easy / In a Vain Shadow was published in April of 2012 with a new introduction by Rick Ollerman and a complete bibliography of Chase’s 90+ works. There is also a great James Hadley Chase website at http://www.hadleychase.co.nr, manned by a die-hard fan named Dr. P. C. Sarkar. It’s filled with information and comments on all the individual books, and I recommend it to anyone with more than a passing interest. This is where I discovered that Chase had written a play called Last Page, which was turned into an excellent Hammer film, Man Bait, featuring Peter Cushing. And yes, it too will keep you on the edge of your seat.
--October 2012
Stark House Press
www.starkhousepress.com

Labels: How I Came to Publish This Book

Patti - Really interesting background on Chase and his work! Thanks for sharing.

I'm a STARK HOUSE fan (I buy almost every book they publish) and I'm a fan of James Hadley Chase. I discovered Chase with NO ORCHIDS FOR MISS BLANDISH. Loved the hard-boiled story-telling. Living close to Canada, I was able to slip over the border over the years and buy British editions of JHC. Chase is an underrated writer.

I certainly have missed his work in some way or another. Good to know there are still many good things to read that I haven't found yet.

I have a boxful of JHC books, including some hardback first editions. I prefer the earlier UK editions, with artwork covers by John Pollack, Henry Fox and others, to the Panther and Corgi books. Stark House has made a couple of good choices here. I've re-read In A Vain Shadow within the past year. Still a great read!

The only one I was familiar with was NO ORCHIDS before now. One of my husband's favorites.

Patti, I read most of Chase's books in college. He was very popular among Indians of my generation which might explain Dr. Sarkar's dedicated website. NO ORCHIDS FOR MISS BLANDISH and a few other books are now available as free ebooks though early paperbacks with covers of semi-clad women are not hard to find. His books were full of trademark sentences like "I gave him my cop look" as some of the lead characters were, indeed, cops. The crime stories never had the blood and gore kind of violence.

I will have to give it a try then.