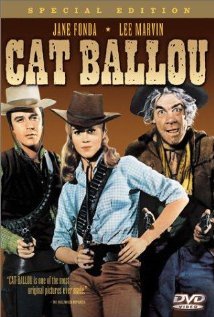 Cat Ballou starred Jane Fonda and Lee Marvin in a movie that seemed more fun back in the sixties. Catherine's father is killed and she hires Kid Shaleen to gun down his killer, Tim Strawn (Lee Marvin plays both parts). There are hangings, robberies, gun play, horses, and music by Nat King Cole and Stubby Kaye, but it's sort of a silly movie And not clever enough to call itself parody.

Lee Marvin won an Oscar for this and he deserved it because he is the sole character of interest. Too bad he didn't win one for any of his far better movies.

Patti - It's the theme song of this one that I mostly remember.

Me too, Margot. I didn't watch many movies growing up, but I remember this one.

No, he didn't deserve it. Rod Steiger was robbed.

I liked it at the time but haven't seen it in many years. Like Margot, I still remember the theme song. Also recall that Dwayne Hickman was pretty good in a supporting role.

Thanks, Patti. I've always considered this one of the most overrated movies ever.

It is a strange movie, which I found slightly more fun in the recollection than in the viewing last time I caught a bit of it in TV.

Here's one I actually saw. Don't remember much about it. But I did like Lee Marvin in it.

Oscar worthy I dunno, but I always enjoyed this movie.

This one was a family favorite for years. The double role for Marvin was one of the great parts.

The horse was funny.

A movie that could have been a lot better had Hollywood stuck to the book. And the book had enough sexual tension that I'm surprised they didn't.