George sent this piece from the WSJ, which was very enjoyable so I am posting the link.

I am not really talking about series like the Poirot novels--where he is essentially the same character and the same age throughout the books. But instead a series where the characters change over time. Where we get a peek at the changes occurring in the world outside them too. 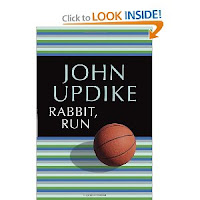 In the non-crime fiction world, I would have to pick Updike's Rabbit books. I was eager to read each one as soon as it was published. And I think he did a great job in capturing each era. Runner-up Richard Ford's series about Ralph Bascombe, beginning with THE SPORTSWRITER and ending with THE LAY OF THE LAND.

In the crime fiction world, I have two favorites-the four Kate Atkinson books about Jackson Brody and the Henning Mankell books about Kurt Wallender. There are many, many more I could have chosen, but I want to leave some for others.

What series do you like?
Posted by pattinase (abbott) at 8:00 AM

These two are probably my longest running favorites.

I agree on the Rabbit books. I read each as it came out too.

In the mystery field I'd say the series that comes immediately to mind is Marcia Muller's Sharon McCone series. She starts as a somewhat insecure investigator working for others and is currently the owner of a large agency with a lot of employees, is married, owns a couple of homes and flies her own plane.

I'm going to go against your dictum and pick a series where nothing ever changes (but each book is fresh and new): P. G. Wodehouse's Blandings Castle series.

In crime, I'd go with Ken Bruen's Jack Taylor series.

The Deptford Trilogy, no debate.

Here's where I admit that I've not read A Dance to the Music of Time, and pose that old question: À la recherche du temps perdu, novel or series? I believe the academics say the former.

I've been meaning to go back to the Anna Lee novels by Liza Cody. There's quite a bit of Anna in my character Diana. They're both authentically tough, meaning that they score high in resilience and endurance.

Over at the Short Mystery Fiction Society Yahoo group I recently started quite a discussion on the Rabbit books. I also loved them, but quite a few people hate Harry Angstrom to the point that they can't read about him.

I also love his Cornish trilogy but Deptford in the best. What a world he creates.

Daziel and Pascoe. It broke my heart to see them decline.

Another series I am just starting to read is the Alafair Tucker series. In each book, the children grow and marry. Tragedy hovers around that early 1900's family and their neighborhood. These are not widely read, but I like them for their gentle style.

Oh, she was a real favorite of mine for years.
A few years ago I attended BREADLOAF and most of the writers spent lots their time making fun of Updike. We'll see who's around in thirty years.

I really like the way Peter O'Donnell maintained the Modesty Blaise series, even though I cannot read the last book in the series without grieving for Modesty and Willie.

I really liked Philip Roth's Zuckrrman books though I admit that I haven't read one since THE COUNTERLIFE. the books that were collected into ZUCKERMAN BOUNDwere great.

For mysteries I have to say that the Continental Op stories still fascinate me.

I have never read Modesty Blaise. Funny the gaps we have in our reading. And I have only read one CONTINENTAL OP story.
I like most of Roth. Zuckerman was a good character most of the time but I really like his trilogy beginning with American Pastoral and ending with The Human Stain the best. And several of his most recent books especially NEMESIS.

James Sallis's "insect" series, The Long-Legged Fly, Bluebottle, etc, and it is both literary and crime fiction so I claim it for both. :)

What comes to mind of me is Upton Sinclair's Lanny Budd series of 11 novels. They take place over a long time and he changes dramatically over those decades.

Robertson Davies first three novels--Tempest Tossed, A Leaven of Malice, and A Mixture of Frailties--often referred to as The Salterton Trilogy, while not as deep as the Deptford or Cornish novels, are wonderful mud-century Canadian works. Characters grow up, fall in love, marry, have children, find careers. Well worth reading.

On the mystery side, I like Cynthia Harrod-Eagle's Bill Slider books. Please read in order because the characters really do grow and change.

Had the first one from my library but had to return it. Will get it again.

Don't think I have ever read them, Rick. Wow. I think THE JUNGLE might be the only U.S. book I have read.

Two of them sit on my shelf, Charles.

Yes, the Bill Slider books are good. I had to get the last few directly from England. If you want growth and change, how about Julia Spencer-Fleming's Adirondacks series with Rev. Clare Fergusson and Police Chief Russ van Alstyne? At the other end of the country there is Undersheriff Bill Gastner in Steven F. Havill's New Mexico-set series. Lt. Joe Gunther all over Vermont in the series by Archer Mayor is another good one.

yes on Updike. Balzac, Proust (I guess that's more of a superchunk than a series). Ian Fleming. It occurs to me that Bond = Dexter with a license to kill, except more of Bond's victims work for larger organizations. Weird, come to think of it.

Does Bond change at all over the series? I have only read the first one. My intuition tells me his fans would not like to watch him grow old.

Only series - mystery or not - I can think of that fits is Bernard Cornwell's SHARPE series.

Oh, wait. The HEREVY cavalryman series - heavy on horse detail - set during and after the Napoleonic Wars by Allan Mallinson. I got behind on that series because some titles did not make it from the UK to the U.S.

I'm with you on Updike's Rabbit series ... very enjoyable.