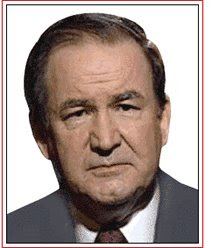 in the Democratic Primary. I'd sworn off a writing a blog entry today, but this really gets to me.
Should former candidates for the Republican nomination for President be given credence as network pundits? Should they be allowed to participate in the process regularly by commenting in a duplicitous way? They are brought on to these shows as a neutral observer, not as a Republican (or Democrat).
Buchanan constantly extols Hillary Clinton's advantages. Does he really think she's the better candidate or just easier to beat? Is he objective? I'm sure there are similar "guest commentators" pushing Obama's interests. This is not meant as a rap against Hillary. Just the networks duplicitous commentary.

Well, no one has an objective opinion. He's not even disinterested, and no one should pretend or be so naive as to think he is. However, if ever there was a maverick among Insidery Republicans, it's Bukey, who it might be remembered ran (or walked) against Shrub for President as the primary Reform Party candidate in 2000, and spoke sensibly against K. Harris's attempt to attribute probably unintentional votes to him that were instrumental in putting Shrub over the top (much more instrumental than anything Nader did, and part of what gave cover to the Sups handing Bush the nod against the will of the plurality).

Also, he ran against Bush the older shrub for the GOP nom, but I remain convinced that was mostly to defuse the insurgent campaign of David Duke, which was gaining traction.

So, I suspect he actually does prefer the more pugnacious Clinton, since if there's one thing that Buchanan is, it's pugnacious.

Really, though, do we think that people hear Buchanan and think, Why, there's a guy who has no ax to grind...He must be truthing! The bland, self-satisfied assumptions of the likes of Wolf Blitzer or Charles Gibson seem a lot more misleading in this regard to me...but I hope and even suspect that most people, at least, who pay any attention to such coverage realize what bibble these folks cough up. You'll note that Clinton didn't sail to nomination, and it ain't Giuliani and Romney slugging it out for the GOP, as Supposedly Wise Heads would've had us expect not too many months ago.

Though I also wouldn't be surprised if Buke didn't seek the Reform nom in 2000 in hopes of minimizing the damage of a Reform run against the GOP, as it was mooted that Perot was more a draw to potential Republicans than he was to Dem-leaners. (Inasmuch as the other leading and on a few states the ballot-line candidate for the RP was the Maharishi's man/Natural Law Party permanent candidate John Hagelin, the Reform Party was clearly going vaguely liberal in 2000 w/o Pat B or Jesse Ventura getting the nod).

But as even a glance at Buchanan's magazine THE AMERICAN CONSERVATIVE will demonstrate, if PB's distaste for neoconservatives isn't genuine, it sure is a loud and sustained front.

The trouble comes from having far too many hours to fill and they're filling most of it with news of the Dem. primaries and have to search broadly for those willing to spend their lives at the studio. Too much talking gets one into trouble. Compare the coverage given to primaries twenty years ago.

Only about five "news" channels twenty years ago, and two of those were CNNs and one was C-SPAN (and the other two were pretty marginal). As Ed Gorman noted the other day, they have been glorified local tv news pretty much from the start, with bloviation added.

I watch MSNBC's Morning Joe while I'm working out before work. They irritate me, because they're pretty much all Republicans and it's a huge Hillary lovefest every day.

How Hillary can accuse the pundits of sexism is beyond me. I haven't heard anything like that from any of them. They all seem afraid to actually state that she's lost. Except for Tim Russert. Although I have my own issues with him.

Yeah, you really can't expect any objective commentary from, well, anyone. OK, McNeil/Lehrer or whatever it's called now is more or less objective, but it's also way too dry for anyone's tastes. People tend to watch and listen to either 1) whomever they agree with entirely or 2) the person they hate the most.

I'll admit, I watch way too much Keith Olbermann and I know I'm not getting a very objective view of the news - however, some of his commentators keep him grounded, like Jonathan Alter and Richard Wolfe. But there is no way in friggin' hell I would watch FoxNews for anything but a laugh. At least Olbermann admits that he's bias against the GOP.

And these shows usually have the "liberal" talking head and the "conservative" talking head so it can balance out. However, it usually means shout matches or proves one to be a complete idiot.

The days of objective journalism (or at least people pushing their own opinions aside) are long gone.

NEWSHOUR leans toward Establishmentarianism, rather than objectivity, part of the reason it tends so dry. (And even that doesn't save them...Archer Daniels Midland has taken their genetically-modified "underwriting" marbles and gone home, leaving the show in somewhat precarious financial shape in the last few months.) Striving for objectivity was always a noble goal in journalism, but has always been observed more in the breach than in the practice, albeit the Appearance of Objectivity is still popular at our so-called Papers of Record. See THE FRONT PAGE/HIS GIRL FRIDAY, THE BEST AND THE BRIGHTEST, and any mumber of other documents and artifacts...the golden age of journalism has always been a sometime thing.

To be honest I'm not sure there are any unbiased opinions. I'm not even sure I believe in the concept. I always consider the source and try to blend a variety of info before forming MY opinion, which is really the only one that matters to me.

No, by definition there isn't an unbiased, or objectve, opinion. There might be an unbiased assessment, but that's kind of a Platonic idea if we're rigorous about it. Like objective journalism. Or how nothing in science is Absolutely true, as opposed to appears to be true so far, or even better, the current dominant model seems the most valid.

Having just listened to NPR's TALK OF THE NATION, it was pretty interesting to hear women call in and claim that they would vote for anyone but Obama because of the snide comments about Clinton by the likes of idiot-boy Chris Matthews.

So much for rational choice, if they actual act as they claim they will.

I think that Pat Buchanan is a rude, yelling blow hard. But he is also fun to watch. If you take him seriously, shame on you.

As a member of the Northville Democratic Club, I have watched with some amazement as the mood of the membership has changed. We had a mock caucas last December where Clinton and Obama tied. What surprised me was that Biden came in third and Edwards didn't make the first cut.

Now we are down to Clinton vs. Obama supporters. Because our group is dominated by retirees, most favor Clinton. However, I am sure that regardless of who wins the nomination, this group of dedicated Democrats will vote for Obama if Clinton doesn't get the nomination.

PS: If you live in Northville or Northville Township, come join our club. We have grown from 15 members two years ago to over 100 now. Democrats are very energized, even in Republican dominated Northville.

I wish I could take it as a joke or a riff, but I'm deadly serious about this election, I guess. It really makes me angry when a Republican cloaked as a commentator offers his take without identifying his real interest.
I think we are practically the only Michiganders on this blog. I belong to the G.P Dems. I hope we can take our First District seat in the state this time.