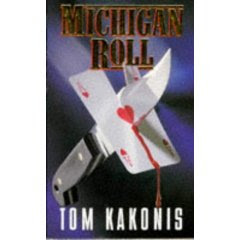 The great neglected forgotten writer in my opinion is Tom Kakonis.
He wrote a wondrous series of novels featuring an ex professor who'd served time and is now eking out a precarious existence in Las Vegas under the dubious mentorship of a very shady acquaintance.
The writing is dark dangerous poetry and the violence when it comes, is sharp and shocking, an air of doomed menace looms over the novels like a palpable cloud.
Michigan Roll, perhaps the very best in the series,, is a true forgotten classic.
Kakonis abandoned this stunning series and now writes under a different name.
The atmosphere of being damned, of no hope, of no redemption is noir like you rarely read.
The characterisation is superb and the sheer agony of seeing a decent man who never caught a break and knows he is screwed is heart wrenching.

To be perfectly honest, I've never written a book review. For me books have always been a personal journey, something I've kept to myself, so I hope you'll bear with me as I tell you a little about the book I chose.

The book is "The Quiet Game" by Greg Iles. I'd been dipping into the work of several Southern writers when I stumbled across The Quiet Game. Published in 1999, the book centers around a thirty year old mystery.

Penn Cage is a lawyer who, with his daughter, returns to his parent's home in so the two of them can heal after the death of his wife. He gets prodded into investigating the unsolved murder of a black man in 1968. A murder that neither the black nor white community wants re-opened. Everyone is guarding their secrets, playing the quiet game.

Iles lays bare the undercurrents of a small southern town from the racial to the political. His wonderful writing weaves the secrets of the past into the secret lives of the present, exploring the effects of choices on people, their families and the community.

My poor summary doesn't do justice to the many layers that Mr. Iles has written into this book. His words make you sit up and think, chew your fingernails when things go terribly wrong, and smile when you realize that under all the conspiracy and mayhem the story is about justice in its truest sense.

Great Idea, I'll be posting one today on my blog, Razored Zen, which is http://charlesgramlich.blogspot.com/index.html

Thanks for a great idea.

This seems to really be catching on...I've already read one book that was someone's pick a couple of weeks ago. Great idea.

Great, Lisa. When you post your next forgotten book, mention that. I'm trying to read a couple for next time too. It knocks me out how few I've read. A lot of forgotten books, huh?

I'm afraid one of the Forgotten Books just made my Why I Stopped Reading list - I'll still check out the others, though.

Patti, might I suggest you post link to an online bookseller for those anthologies in your blogroll?

I can't wait to find out the book you really liked.
Good idea. Now that you're not writing your blog for the summer, you can help me with mine. I'd never thought of that.

spooky seeing the Ken-one big-up the Kakonis book, as I've just ordered a copy of Double Down his 3rd book.

Is Kakonis still writing currently?I know he had a couple of books out in the 90's under an Adam Barron pseudonym, but I think they didn't do very well because of a lack of push from the publisher

I'm gonna hazard a guess that Ken won't see this to answer Colman. Maybe someone on Big Adios will know. Or Rara Avis.

cheers Patti,
I've stuck something on Big Adios, so hopefully I'll catch up on what he's upto

Best place for it. Or maybe crimespace too. We do have our resources nowadays.

===================
Detectives Beyond Borders
"Because Murder Is More Fun Away From Home"
http://detectivesbeyondborders.blogspot.com/