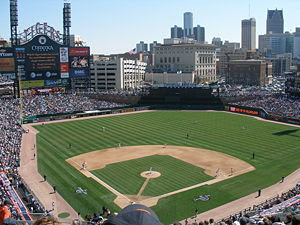 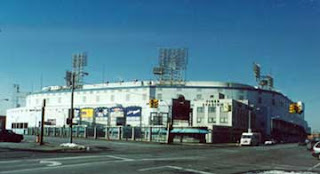 Sure we have in now and a new generation will make its memories there. It’s the new look in stadiums: open, friendly, all the bells and whistles. Corporate boxes, designer food, waitresses to take care of you, amusements for the kids, wall-to-wall bathrooms, for the women at least, a scoreboard so elaborate you’d need never look to the field.

But once upon a time, eight years ago, in fact, there was Tiger Stadium. It has sat on the same corner (Michigan and Trumbull) in a section of called Corktown since 1895. Every seat was close to the field. There were not enough bathrooms, snack bars, good unobstructed seats. You didn’t get the feel of being outside. But it was Tiger Stadium for better or worse. It was our place to watch baseball and its name was the right one, no corporate reminders.

Tiger Stadium has sat empty now for eight years. A hundred plans to reuse it have gone awry: condos, shopping, restaurants, a college stadium, a memorial stadium. None of them happened. Late last year, the city auctioned its innards off— like grandstand seats, the dugout urinal, Al Kaline’s locker and the fence in front of the right-center-field light tower, hit by a Reggie Jackson home run in the 1971 All-Star Game. Last month, the city tentatively awarded a partial demolition contract for the stadium.

People hoping to save it, the Old Tiger Stadium Conservancy, has until June 1 to raise $369,000 to try to save part of Tiger Stadium, even temporarily. The group includes Ernie Harwell, the retired Tigers radio broadcaster.

If that goal is reached, Senator Carl Levin said he will look for greater financing in the 2009 federal budget to preserve the oldest part of the structure around the infield and redevelop the playing field for amateur teams.

Levin, who grew up in the city, would like to see the stadium remain in some incarnation.

Philanthropic groups have discussed contributing money to stave off a full demolition that may begin in weeks. But we’ve heard this sort of rumor for eight years now. And the area the stadium in is in a severe decline, especially with current economic woes, since the stadium moved east. The Tigers organization has not shown a lot of interest in preserving the field. They've moved on with their stadium.

Preserving even a remnant of the structure would add to the costs so the demolition companies have offered to pay the city $300, 000 if the whole thing comes down.

How have old stadiums fared in your neck of the woods? Is any attempt underway to preserve Yankee Stadium?

We have no large stadiums to speak of in my town but I understand why teams want new and better playing venues. I also understand the nostalgia behind such hallowed ground as Tiger stadium, but sometimes change is necessary no matter how sad or painful.

My husband says only me could make both the new and the old stadium sound depressing. Sorry!

The Polo Grounds and Ebbetts Field are long demolished. Both sites are now apartment buildings. Shea Stadium is being replaced and horror of horrors, this is the last season for Yankee Stadium. To my knowledge they will sell it off bit by bit, sort of like e-bay and then knock it down.

The old Cleveland Stadium is long gone. There is a new-ish Cleveland Browns football stadium and the Indians home, The Q (formerly known as The Jake)------if someone gave you millions of dollars would you change your name?

I guess we learn to take money for things like changing a name in corporate America, but I don't think it's a good thing. I first hoped we would name it Comerica Park but not call it that. But that didn't happen. Comerica Bank at least played a part of the Detroit community eight years ago but now they've moved their headquarters out of here.

I went to a lot of games at both stadiums - was appalled to hear the news.

Was it Mark Twain who said that politicians, old buildings, and prostitutes become respectable with age?

I have very little sentimental attatchment to old buildings. I spent many a terrific afternoon/evening watching my Expos play at Jarry Park in Montreal in the early '70's. The Expos have moved to Washington and Jarry Park is now a terrific tennis facility. Life goes on.

This idea, too, of the naming of stadiums gets people quite upset but the real difference is that companies are no longer named for people - parks often were: Wrigley Field for the chewing gum company that owned it is the easiest example, but there are lots of others.

For years sports team ownership wasn't exactly a noble enterprise, full as it was with gamblers and booze salesmen. It was one of the first "victims" of the middle-class-ification of America and got cleaned up as all profit-making enterprises do (like soccer has in England, and gambling in Vegas and with lotteries).

Sorry, I'm not trying to out-depress you Patti (and that was a very funny line of your husband's), I guess growing up in Montreal and seeing all the corruption around the staging of the Olympics I've started to see all these things in a different light.

Maybe losing the Expos has affected me more than I like to admit....

LA still has the Coliseum and Pasadena the Rose Bowl, and I don't think they're going anywhere any time soon. The only stadium in OC is Angel Stadium in Anaheim which isn't that old.

I don't have a big problem with corporate sponsorship except that they take out the city name and then I don't know where anything is anymore. I'll be really depressed when the name "Indianapolis 500" disappears, lol.