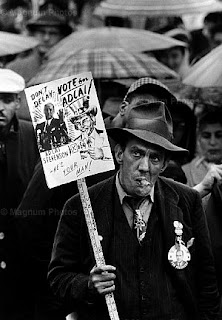 My husband and I take a walk every night and almost always discuss politics since it's his profession and an interest of mine. Last night we discussed whether Hillary should drop out and whether she will be perceived as a poor loser if she doesn't soon do this.
Which took us to the subject of poor and gracious losers and we came up with a short list.

"Gracious Losers": Adlai Stevenson who lost to Eisenhower twice was known as the Beautiful Loser, he was so good at it. Also on this list would be Stephen Douglas who lost to Lincoln and immediately offered to help him, David Dinkins, in the New York mayoral race, Bill Bradley, Senator George Allen, Al Gore (although Republicans might put him on the other list)

In the "Poor Loser" category, we could come up with more names outside of politics. Tonya Harding, of course, Kanye West, Faith Hill, John McEnroe, the British football team, the Arsenals, the sports fans in Philadelphia. In politics, we have Ted Kennedy who wouldn't shake Carter's hand in 1980, Richard Nixon, of course, Kwame Kilpatrick in Detroit.

Any others?
Posted by pattinase (abbott) at 8:28 AM

American presidential elections have a kind of finality about them. In Canada (and other parliamentary countries) losers of elections can't afford to be sore about it because they have to go to work as the Leader of the Opposition - well, in reality, that doesn't stop a lot of them from being petulant crybabies.

Do you think we're seeing more sore losers because the stakes have become so high? Or we think they're so high? The whole idea of 'win at any cost,' has become quite accepted.

The Olympic idea of, "The most imporant thing is not winning but taking part," has been replaced by, "Winning isn't everything, it's the only thing."

Now, of course, you could say taking part only matters in sports but if you lose an election and people die because they can't get medical treatment, winning that election is more important than the World Series. If you're willing to be a gracious loser in an election then you'll probably be a loser. If you're running because you really believe people need government changes to make their lives a lot better and then you lose and say, oh well, at least I tried, then people may wonder if you really believed.

I think the problem is, we can't tell the difference between sports and politics and both have suffered because of that.

(Saturday Night Live had a skit with Amy Poehler as Hillary giving reason to vote for her and #1 was, "I'm a sore loser.")

You gotta think that Mugabe is right up there.

Hillary is just holding onto that slim chance that Obama is going to be revealed as a member of Al Queda or something (of course if he does, then you'd hope that those Superdelegates would change their votes). Her whole stance now is that she's more electable that the guy who's received more votes than her - huh? And her whole thinking that racist, oops, I mean non-college educated whites, will be her ace in the hole come November is a little flimsy (Congrats, you won West Virginia, too bad those racist states weren't first.) Besides, since those kind of people would probably vote for the party who has proven themselves to be oppressors. Call me crazy.

Try this nightmare on for size: Hillary refuses to accept defeat at the convention and runs as an independent. She sucks crucial votes away from Obama, and Crazy Eyes McCain gets inaugurated in January. That kind of shit makes me wake up all sweaty.

I've heard that scenario before: that she would run as a third party candidate but how does she differentiate herself from Obama?
You can see Ron Paul's different from other Republicans but Hillary?
I saw that SNL skit. Payback for the earlier one that was kind to her.
Poor losers in award-giving or judging is the hardest to grasp.
Nice timing for the Edwards endorsement for Obama. Maybe he's getting more savy as time goes by.

Is Rush Limbaugh as a sore loser to obvious? When the Repubilcan's lost the House and Senate in 2006, he said words to the effect that he was tired of having to carry all the water for the GOP.

Oh, Rush certainly is a poor loser. I forgot to think of media people.

I believe we're missing the point. Hillary knows she can't win. But she's promised to stay in and that's what she's doing. I think we'll all see what a gracious loser she'll be.

I can see her POV with this. But is it helpful to the party to focus on division instead of unity for another two months or more. I think she'd have been a fine candidate, not very different from Obama, but once that's not going to happen, why would her supporters want her to stay in rather than help pull the party together? Why is it a good thing?

It's not going to hurt the party. The media would like you to think that it's a terrible thing she's doing. But the dems will all pull together. That's been made clear by Hillary and other people in power.

In a strange way, it may help it. Now the gun is turning more clearly to Obama with the sweetie thing.