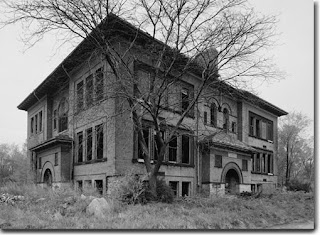 We think of violence at schools as a recent phenomenon, but this incident occurred 75 years ago in a city an hour outside of Detroit.
In 1926 in Bath, Michigan, Andrew Kehoe unsuccessfully fought a long battle against a tax increase to pay for the towns' new school. He won a position as treasurer of the school board to aid his cause, but the city retained the tax despite his efforts. Kehoe claimed that with the added tax burden he would lose his farm and asked that he be hired to work as the school's custodian. The school board agreed.
Kehoe seemed to be a diligent custodian. He was seen doing electrical work in the building along with his janitorial duties. He seemed particularly willing to take on electrical work, saving the school the cost of an electrician.
On 18 May 1927, just after morning bell at the school, 300 pounds of dynamite wired in the basement exploded. The north wing of the school was entirely demolished in one blast. People four miles away reported hearing the noise. Help had to be got on foot since telephones were scarce. Not until noon was a full scale rescue effort mounted. Kehoe pulled up at that time and spotting the superintendent, Emory E. Huyck, aiding with the rescue, and called him over. As Huyck walked over to the car, Kehoe pulled a rifle from his truck and fired into a bundle of dynamite in his truck. The resulting blast killed Kehoe, Huyck, and 7 others.
Forty-four were dead, 30 of those were children. Another 50 to 90 were wounded. Not a family in the area went untouched by the tragedy. The massacre of Bath Michigan made the front page on 20 May, along side news of Charles Lindbergh's trans-Atlantic flight.But the story went on a bit longer. That day they discovered the Kehoe farm had also been destroyed, his wife slain. Horses in the stables had been hobbled with bailing wire so they couldn't escape. There was a sign hung waiting, which read "Criminals are made, not born."
The Bath School Disaster held the title of the worst bombing incident in the US up until 1995's Oklahoma City bombing, and suffered a small historical revival in the time after the Columbine School incident.FOR LINKS TO OTHER MY TOWN MONDAY BLOGS: http://traviserwin.blogspot.com/

No, no, Patti, only Muslims are so insanely pseudo-heroic in their perfidy. Clearly, as our brilliant minds in the foreign policy establlishment, including the think tanks and such magazines as THE AMERICAN SPECTATOR could tell you, these are the acts of Muslim extremists. Kehoe, like the Christian Identity loonies in Oklahoma City, must actually be closet Muslims. Get with the program.

I think it is tragic that Bush and Cheney used 9/11 to justify a totally idiodic and incompetent invasion of Iraq. Next to 9/11, the worst terroist attact in American history was by US citizen Timothy McVey. In addition, all of the 9/11 terrorists were from Saudi Arabia and they all intered the US via United Airlines with legal visas. Eight months of this nightmare of an administration are left. Lets hope we can survive that long.

I'm ready for them to try some last hurrah, aren't you? And my guess would be making a move on Iran, which Hillary apparently supports.

I knew about this one-- being one of dem Michiganders. Unfortunately, acts of senseless violence are nothing new.

Thanks, Clair. I have to say however that I had other pics that somehow got lost and what's going on with the big white space below. I will never master all the intricacies of web stuff.

I had never heard about this, Patti. Clair is correct, I think. Acts of senseless violence have gone on for a long time.

What's disturbing is that so few people know about this. Too often we teach the wrong histories, looking for new reasons for the same problems that have always plagued us.

Today we would blame videogames, drugs, the wrong religion. Not madness and desperation.

I had no idea.

Your posts are always provocative.

Patti-- it's not you. There's something funked up with blogger and inserting pictures. Oh my WORD!

On the other hand, I do find new ways to curse when blogger does it AGAIN. (If you hit "Preview" you can (usually) see if blogger will be adding any huge spaces or otherwise funking up your post.)

You'd think this was a microsoft product the way blogger works... but i guess we get what we've paid for.

Funny how these people that snap often want to take everyone in their life along with them. As if even the horses might tell stories. Or someone else might profit from them.

If blogger screws up any more of my posts or pics, it's me who is going to snap.

Wow, this is similar to my HS being torched. You were lucky to find photos from that far back. Great details.

There was a sign hung waiting, which read "Criminals are made, not born."

Not according to my master's thesis! But that certainly was the belief back then, just as it the belief of the majority of psychologists and sociologists today - it's the neuro-biologists who think otherwise.

Wow. I've never heard this bit of history, but what a tragedy, even by today's standards.

That's crazy- like the guy from the Amish school shootings. He was a pedophile, so obviously it's the girls fault. Riiight.

And for my 2 cents- Hillary agrees and supports everything. Like Orbit gum "no matter what".

I wasn't Just making a snotty joke...these folks tend to think of themselves as heroic...and also simultaneously, and more correctly, as evil. Hence the desire to Rid the World of Evil, including themselves.

WordVixen--the most haunting thing about the Amish school murders and would-be rapes was that they followed a somewhat more successful rapist-murderer of schoolgirls a week or so before, who set himself up in a standard public school till the bullet in his own head, and somehow these young women's experience seemed to be forgoten in the wake of second thug.

In taking themselves out of it with a bullet to the head or a similar suicide, they're refusing to allow the victims any sense of retribution, I think. They will be the only judge of their actions.

Emory Huyck is of German-Dutch origin. Huyck is a direct descendant of Pieter Minuit. There are only three injured victims left in Bath: Marian Markham, Donald Jay Huffman, and Bob Dickinson.