What is Your Inspiration 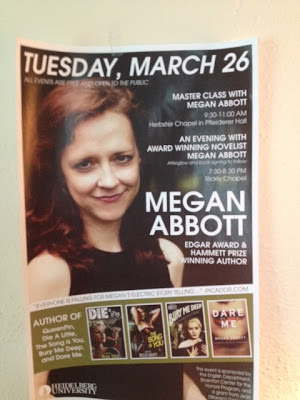 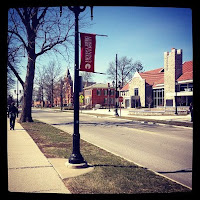 A few weeks ago, we were lucky enough to be invited by Heidelberg College in Tiffin, Ohio to come and spend the day and night there where Megan was writer in residence for a day in this charming college town. We got there in late afternoon, after she had already taught a class, met with writers, met with a women's group and had a few meals with the faculty and students.

But we did get to hear her evening talk, which was on the theme of inspiration and how important it is in her writing. In it she traced what had inspired her in each of her novels. In DIE, it was a picture of a woman's back, in SONG it was a fragment of a movie where Jean Spangler had a moment on screen, in QUEENPIN it was her favorite movies from childhood, in BURY, it was the murder house itself, in END, it was pieces of music and a series of murders that happened in Michigan in her youth, and in DARE, it was the first thirty minutes of FULL METAL JACKET where the recruits go through basic training. In all of them, there were other touchstones, of course, but these were the basic jumping off points.

Can you trace a story or novel of yours to a specific inspiration? Many of my stories, especially in HOME INVASION, emanate from a childhood friend, now dead, who had a strange and conflicted life. They aren't exactly her stories but they come from her world--from the kind of incidents and people she attracted.  And her face is often with me as I write.

What about you, writers?
Posted by pattinase (abbott) at 6:46 AM

Patti - I think for me it's location. Most of my adult life has been spent in and around college campuses. I think they are what inspired me to focus my novels on a campus, and I have kept them with me as I write.

Congratulations to Megan! You and Phil must be so proud of her. Those students are certainly learning from the best.

My inspiration is often of the 'what if' variety for short stories. Sometimes it's location, but most often imagining a character does the trick. Historical research often gets me details that inspire a story or plot line.

When I feel creatively uninspired, a good movie or a visit to an art museum helps.

I have recently published two short stories about the difference between how a crime is carried out versus how it look on the security cameras.

This inspiration comes directly from my boss who installed the security cameras at my work.

Usually, it is very small details that get me going.

As a writer of mostly nonfiction, I tend to get inspired by other writers. Most recently, John McPhee's essay in The New Yorker on "Structure."

I don't write enough fiction to have a single or obvious recurring set of types of inspiration...but I do have the same sort of triggers that tends to get me going in the commentary and other nonfiction I write...something fascinates or irritates or amuses me, and suddenly or eventually I find myself responding in the one wise or another. Writing definitely inspires more writing, for me (and, I suspect, for most)...and the company of writing family can only be a spur, I think. I hope the kvelling wasn't too overwhelming...and that you're getting prepared for your own speeches down the road, Patti...

Most of the time I can trace my inspirations pretty clearly. I typically include some information about the stories and their inspirations in my collections. It's not often just one thing, though.

Dave Zeltserman said...
This comment has been removed by the author.
10:28 AM

Everything I write is inspired one way or another by the Marx Brothers movie Horse Feathers.

That is so funny, Dave. I know another guy who is also inspired by them but his work turns out completely differently than yours.

Yeah, like Mr. Gramlich, most of mine can be traced back to a single thing. Sometimes an event, or a news story, or maybe even an homage.

My first book was inspired by being dumped by a woman I loved. The second by my appreciation of and studies into the Little Big Horn.

A lot of my stuff is inspired by things I've read. After reading THE BIG CON and, later, GOD SAVE THE MARK, I decided to write a con-man story. Another story started off as a Richard Stark homage, before turning into something more Westlakian.

The only story I can think of that was inspired by real life is a story of a private eye investigating the murder of his best friend's wife. The friend did in, naturally, and it's mostly about how hard it is to really know someone, and how people can change.

It's inspired by a friend of mine from college who lost his job, and eventually decided to murder his dad for the insurance money. Things went wrong and he nearly killed his brother. He's now server a life sentence in federal prison.

it happens sometimes that people and writers, in particular loose their inspiration and muses, follow http://skywritingservice.com/blog/how-to-find-your-lost-inspiration and maybe you may find some ways out and find your lost inspiration!