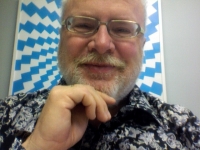 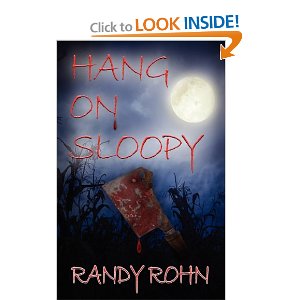 I learned today on facebook that Randy Rohn died suddenly in his sleep on Sunday. At first, he wrote under the name R2 because he was in advertising and didn't want the two to bleed. Although we never met, we corresponded somewhat and I was always amused at his witticisms on facebook. I will miss him. Two hard deaths this week. Online extends the number of people you cheer for and mourn.

Randy Rohn was the author of HANG ON, SLOOPY as well as many short stories. One was chosen for THE BEST MYSTERY STORIES of 2009.

R2/ Randy participated in many of the flash fiction challenges and wrote some entries for Forgotten Books early on. He was a very quick-witted guy. I hope he doesn't mind, but I am posting one of his flash fiction stories here. In this early one, we swapped opening paragraphs.

To quote Randy's last line, "TO THE BADDEST CLOWN AROUND"


SEND IN THE CLOWNS

This is some flashy fun in which we were all given opening sentences and asked to finish the story.
My opening was: For all the thrills and excitement I get, the part I hate is getting the blood out of my clown suit.

And here is the story...

SEND IN THE CLOWNS

For all the thrills and excitement I get, the part I hate is getting the blood out of my clown suit. Club soda doesn’t work nearly as well as they say it does. Spot removers leave a vestigial stain. And the laundry? Forget it. Sometimes I just have to throw the suit away. It’s a pain, no doubt. But it has to be done.

All the beatings and the killings and the bloodshed can’t be helped. It‘s just the way it has to be. Sometimes you have to crack a few eggs to make an omlette.

It started with Augie Doggie. I bumped into him at a backyard birthday party for the mayor’s son.

I was pulling quarters out of the children’s ears, shooting water from my oversized boutonnière---the usual. He was on the other side of the patio, just waving and hugging children one by one. No style. No class. Not even much of a show. I came up behind him and yanked his tail. “What are you doing here?”

“Same as you, entertaining the kids.” He didn’t even try to mimic Augie Doggie’s voice. He turned his back on me.

“I got some advice for you, be out of town by sunset. We don’t like your kind around here. This is a clown town. Always has been. Always will be.”

Soon there were a pack of brightly-colored dogs roaming the streets: Doggie Daddy, Huckleberry Hound. Ruff, Scoobie Doo, and Astro.

I didn’t like it. The other clowns didn’t like it. But we stood by and did nothing. First the canines and then came the other Hannah Barbarians: Quick Draw McGraw, Trixie and Dixie, Magilla Gorilla, Tom and Jerry, Yogi Bear, Boo Boo, Cow and Chicken. Our town was turning into a damn zoo of human-sized cutesy animals. I don’t like cutesy,

“We gotta do something,” Henry the Hobo said at the next meeting of the Clown Club. “Costumed characters are taking over. They have to be stopped.”

One of the old timers, Chuckles the Clown, called for restraint. “I say we let it be. They’re not hurting anyone. They’re only doing the jobs we don’t want to do anyway. Church picnics. Small birthday parties. The crap jobs. We can coexist.”

He couldn’t be more wrong. The dominoes started falling. After the animals came the minor heroes, Johnny Quest, the Power Rangers and the Hurculoids. Followed, of course, by the DC and Marvel cost-tumors. We saw our neighborhoods decline, We watched our jobs go. Who wanted a clown when you could have Batman or Spiderman at your function?

When a couple of other clowns and I showed up at the annual sidewalk sale and saw Barney on the stage, I lost it. That had been our gig forever and I wasn’t going to let some pussy purple dinosaur ruin it. When he came off stage we jumped him and beat his purple ass black and blue.

However, the big showdown came during the July 4th Picnic and Fireworks. Someone had invited a lot of costumed characters to the event. No clowns. This had to be stopped. We clowns were not to become the laughingstock of our own town. We met at the Velvet Painting, a clown bar. We devised a plan. We armed ourselves. We came to the show loaded for bear, dogs, and what have you. We had seltzer bottles full of battery acid, cream pies filled with razor blades and gunpowder-packed rubber noses.

You think Superman can only be hurt by kryptonite? Well try jamming an exploding slap shoe up his crimson skivvies. Batman didn’t like bats so well when they were Louisville Sluggers wielded by ten angry clowns. Aquaman couldn’t swim for shit with three clowns on his back. And Yogi Bear hated the tricks we put in his pik-a-nick basket. All in all, it was a massacre. Clowns stomped the shit out of the other kiddie entertainers. Frankly, I dug all the violence. I never felt more alive. The costumed creeps found out we weren’t clowning around. They left town.

Since then, we haven’t seen any costumors. Even the Hamburgler and Mayor McCheese have left McDonald’s.

We’ve elected a clown mayor, related to the Bush family, by the way, and have clown majority in the city council. It was decided by our elected officials that our borders were a little too porous, so we’ve built a wall around the town and set up border patrols. We’re trying to keep our town free of undesirables.

Just last night, when I was on patrol, I saw a mime trying to sneak in. I asked what he was doing. He didn’t say a word. So I shot him point blank. My gun had a silencer on it.

So listen up all you costumed characters, you mimes, you dancing edu-tainers and magicians, you’re not welcome in Red Skelton City. We have a zero tolerance policy. Our borders are sealed. And we clowns are not afraid to get a little blood on our mitts. We are the baddest clowns around.

Don’t you forget it.

Very sorry to hear this. I never met Randy, but I did correspond with him a few times. He'll be missed.

Very sad to hear this. I always enjoyed reading Randy's observations on Facebook. Witty and clever and with a brilliant wry sense of humor, the world could use a lot more people like Randy. My condolences to his family.

I remember this story well, and also his BAMS 2009 story, which was called "The Man Who Fell in Love With the Stump of a Tree." Randy was also a regular presence in DZ Allen's Muzzle Flash. He'll be missed.

Sorry to hear this. I enjoyed the stories of his I'd read.