Andrew Nette is a Melbourne writer. He blogs at
thttp://pulpcurry.wordpress.com/


The Song is You is only the seco 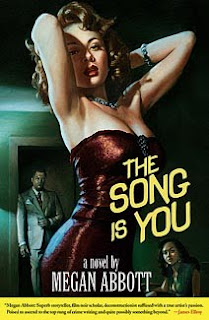 nd Megan Abbott book I’ve read, but it’s cemented her place in the select group of authors whose work I recommend to friends with undisguised envy about what awaits them.
Hell, can Abbott write and her take on post-Second World War Hollywood is distinctive and razor sharp.
The Song Is You focuses on Gil ‘Hop’ Hopkins, a studio publicity man/fixer/pimp whose beat is “the world of trouble between mid-night and seven am”. Whether it’s rescuing starlets from opium dens and rough trade or procuring quickie abortions for leading men and studio heads who want to maintain their happily married public personas, it’s just a job for Hopkins.
He does what he’s told and doesn’t ask questions until he gets involved in the disappearance of starlet Jean Spangler, two years missing with no clues other than a mysterious note and a swirl of rumours. They shared a moment, if you can call it that, the night before Jean disappeared. A group of them had been drinking hard and they ended up in a seedy harbour side bar, where Hop left Jean in the company of a couple of big name studio crooners with a reputation for playing very rough.
Girls like Jean, drawn to Tinseltown from dust bowl towns across America with stars in the eyes and hopes of making it big, are a dime a dozen in Hop’s world. He’d hardly given her a second thought until a friend of Jean’s makes contact, accusing him of being one of the people responsible for her disappearance.
Soon, fuelled by guilt and the need to protect his own arse he’s investigating every last detail about the night in question.
There’s a hard-bitten female journalist who is also looking into Jean’s disappearance, plenty of mob connections and a whiff that Jean may have been involved in her own illegal scam. There’s also plenty of sex. It positively oozes from the pores of the story, amid the mood lighting, calypso music, tiki torches and martinis.
The parallels between The Song Is You and Ellroy’s Black Dahlia are obvious, their noir sensibility, the era they are set in, their mix of fact and fiction, right down to their raven-haired party-girl victims. But there’s something about Abbott’s book that sets it apart.
I think big part of it is her less is more style. This allows her to hint at horrendous events, introduce the sleaziest characters and take us to the very worst places, without collapsing into cliché. She’s also a master of allowing class, sex and social observation to collide in a way that does take away from the precision of her plot and characters.

This sounds fantastic and I love the cover, too ~!

She has sure established herself as a true talent.