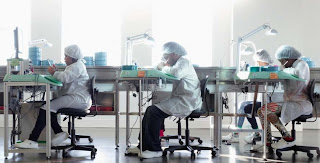 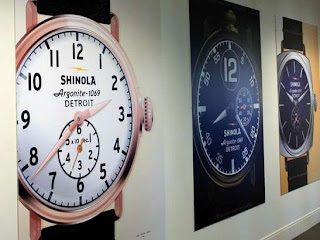 Shinola began its journey in Detroit last year when ten locals began their training in the art of fine watchmaking in the New Center area of Detroit . The watches will be sold online, in Detroit and in New York. They are hoping to produce half a million watches a year when the business really gets rolling. The first line-a limited one-has already sold out. The goal is that in sixty years, a grandfather will be able to pass down his American-made watch to his grandson.

Watchmaking has not been done in the U.S in recent years but Shinola hopes to change that.

The watches will retail from between $400 and $800. The Shinola brand will also include high-end bicycles assembled and sold from a Shinola retail/assembly space in Midtown, and a
a line of leather products such as journals. All the products will be made in Detroit.

The goal is to eventually have every aspect of the product produced locally although currently there is involvement from several international companies. The watch-making instructors come from Thailand.

The area where Shinola is located was formerly the headquarters for G.M. but in recent years has been undergoing some pretty intense redevelopment. Shinola adds a touch of class to the area. Pickles, watches, bikes, food. What's next? Maybe cars?

Much of the information contained here came the John Gallagher in a Detroit Free Press article last June.
Posted by pattinase (abbott) at 7:30 AM

Patti - Oh, this is really neat! I don't know a lot 'up close' about many fine watchmaking places, and good for Shinola to want to hire locally.

I guess I know shit from shinola. ;)

Charles beat me to it.

Diane and I thought about getting our son, Patrick, a watch for Graduation. But, when we ran the idea by him, Patrick said, "What do I need a watch for? I have an iPhone." Watches and clocks may run into a generational sea-change.

I'd like a pretty one for the mantel. A nd women still see it as jewelry.

I hear those comments about, "I don't need a watch, I have a phone." I could go on and one about how I disagree.

Based on my observations most young people don't know (or forget)their phone has a clock on it. At least with a watch you don't have to remember to keep turning it on and off in public places.

Watches are a status object these days more than a necessity. But good for Shinola for giving it a go.

I never heard that slang phrase and had to look up its origin. Shinola was an old shoe polish brand for anyone interested. I guess it's pronounced SHINE-o-la, but I would've guessed it was the "short I" sound. Why is a watch manufacuterer using that old trademark? Seems like it is setting itself up for mockery.

I love finding out stuff about words/brands we all know. Thanks for sharing.

It's not just generational, George. Jackie feels the same as Patrick, but then she's never really been a "watch" person. I feel undressed without one and if it breaks or the battery dies I'm lose until I get another one.

After dropping my watch on a tile floor I need to replace the cracked crystal. But, I am loath to be without a watch and do not want to buy a second one during the first watch's absence.