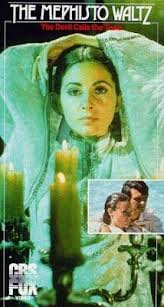 I think this was probably a pretty junkie movie, but at the time I sort of liked it. Alan Alda plays a classical piano player who befriends a more famous pianist who's dying. He(Curt Jergens) turns out to be a satanist, who arranges to have their souls switch places at his death, so that he can be young again and continue to play.

Alda's acting style clashes with Jergen's. But I liked the book by Fred Mustard Stewart so I gave it some slack. Barbara Parkins and Jacqueline Bisset were suitably lovely but also lacked the acting chops to put this one across. No doubt inspired by ROSEMARY'S BABY's success, this one kind of flopped. Alda went on to more fame, but I never saw Parkins again.
Posted by pattinase (abbott) at 8:00 AM

I almost didn't read this because I was confusing this movie with MEPHISTO, a German movie that came out a decade later.

This is something entirely different. Might want to check it out.

I remember liking this at the time, but haven't seen it since. Even in my youth I recognised its unoriginality, but I liked Alda.

As someone said on Twitter, the 70s sure did occult well. Pity we don't have much good now. I suspect it's the improvement in SPFX (discuss).

I liked the Fred Mustard Stewart novel, too. But I never saw the movie version. I'll have to track down a copy.

It was a pretty weak movie, as far as I remember it. Parkins came to fame on Peyton Place followed up by the movie version of Valley of the Dolls. She moved to England where she lived for many years, then to France, and finally back to her home country of Canada.

I re-watched this recently and thought it stood up pretty well in terms of a creepy, seventies occult movie. Alda, Bisset and Jurgen's are great and there are some seriously creepy moments in it. In all, much more satisfying than most of the blood drenched horror fare we are subjected to these days.

Good to know. So often movies you enjoyed at the time disappoint.

Not familiar with this one at all, Patti. Barbara Parkins had an odd career. I believe she starred in the television Peyton Place as 'the bad girl' (I could be mistaken since I'm dealing from memory here.) She left the show to make movies and looked as if she would have a good career. I don't know what happened.

It used to be on TV a lot when I was alive and I remember really liking it. Parkins is a class act.