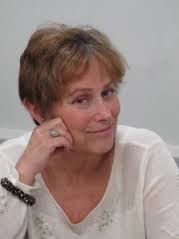 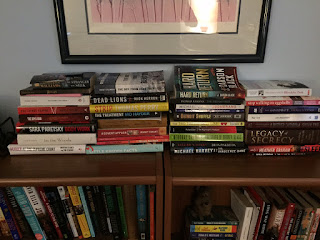 Only a few… let’s see:
n  A memoir of a woman in the WACs during WW2 and posted to Europe: “Molly’s War”
n  The Swimmer
n  A God in Ruins
n  All The Light We Cannot See
n  The Guns of August
n  And The Mountains Echoed
n  The Secrets of Bletchley Park

For all his “oeuvre” – probably James Cain
For one novel: Harper Lee, To Kill A Mockingbird

The King James version of the Bible

It changes often, but right now I’m torn between Lisbeth Salander and Scarlett O’Hara – actually, maybe they’re not so different after all…

I really don’t return to books once I’ve read them.

My next release, which should be toward the end of June, is a historical novella called The Incidental Spy. It’s about a German refugee who is forced to spy on the Manhattan Project during its early years at the U. of Chicago. It will be out in ebook on Stark Raving Press and also in print, at all the usual suspects.

I love it that you have so many different books on your nightstand! And I think To Kill a Mockingbird is an absolutely classic.

Patti, You have the wrong link on my Forgotten Friday book. --Joe.