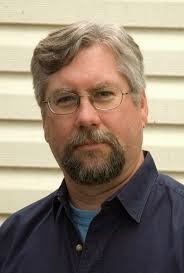 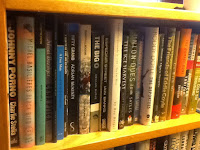 
Days of Rage by Bryan Burrough. The subtitle is: America's radical underground, the FBI, and the forgotten age of revolutionary violence, so that pretty much sums it up. I’m quite surprised  reading the book at the large number of bombs that went off in America in the early 1970s. As it says, “During an eighteen-month period in 1971 and 1972, the FBI reported more than 2,500 bombings on U.S. soil.”


And a novel called Harmless by a Toronto writer, James Grainger. It’s kind of The Big Chill (or my favourite, Return of the Seacacus Seven) reunion story but they bring their kids and a couple of teenagers go missing.


I have many, it really depends on my mood. I was certainly influenced by Elmore Leonard but I really enjoy a lot of novelists working today – Adrian McKinty, Declan Burke. I mentioned Return of the Seacacus Seven and I also enjoy John Sayles novels, Union Dues and Los Gusanos especially.


What book might we be surprised to find on your shelves?


A lot of Alice Munro. I would have said she was my favourite novelist but everything she wrote is categorized as short stories. Lives of Girls and Woman might be marketed as a novel in stories if it came out today.


I like to read short stories so I return to books like, Esquire’s Big Book of Fiction and some of those Best of collections.
Bio: John McFetridge’s most recent novel, Black Rock, is a police procedural that takes place in Montreal in 1970 against the real-life backdrop of bombings, political kidnappings and murders. The second book in the series, A Little More Free, set in 1972 about the search for the killer of an American draft dodger in Montreal will be published on September 1st, 2015.
Posted by pattinase (abbott) at 7:00 AM

Really interesting! Thanks, folks. Oh, and The Big Chill is a favourite of mine!

Is there anyone who doesn't love that movie?

Someone with reading patterns quite different from mine.

I picked up a copy of Return sometime in the past year, but haven't got around to watching it again. I also have the two Sayles novels John mentions and a book of Sayles interviews published by the U of Mississippi Press. However, I haven't forgiven Sayles for having Shoeless Joe Jackson throwing the baseball with the wrong had in Eight Men Out. His movie, Matewan, about unions is worth watching.

Always wondered how he got that wrong. Matewan is his best film, I think.

It was John who turned me on to Sayle's writing. UNION DUES is an excellent book.

Nice to see a former rock star character get a mention. Reminds me a but of Tumblin' Dice, of course, which you all should read.