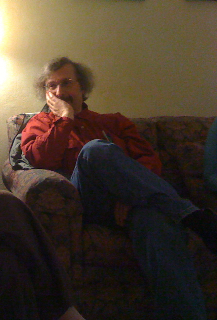 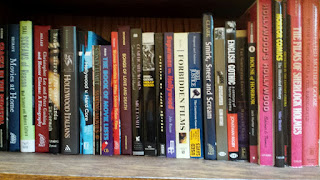 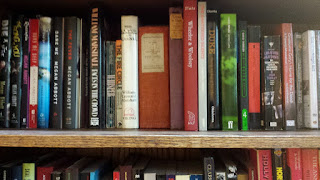 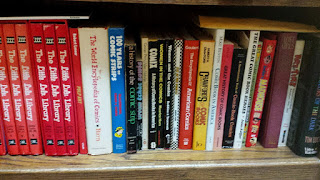 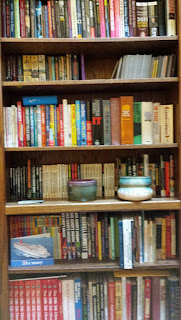 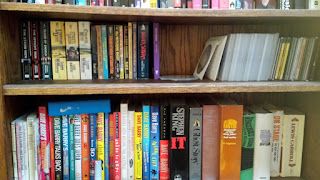 What books are currently on your nightstand?
The Nuns of Sant’Ambrogio, a historical account of a nineteenth-century convent scandal (which I bought partly for the title but which I’m having a hard time slogging through) and The Golden Apples of the Sun, a Ray Bradbury anthology—the original paperback that I purchased for 40 cents back in 1961.

What book might we be surprised to find on your shelves?
Three Comrades by Eric Maria Remarque because it is essentially and mostly a romance (as in “love story”), something I don’t usually gravitate toward. (But I saw and loved the 1938 movie—co-scripted by F. Scott Fitzgerald—when I was about 12 and had to get/read the book.)

Who is your favorite fictional character?
I struggled with this one and could come up with no satisfactory answer. I was thinking Odysseus, the original hero on a journey, but not all of his qualities are admirable. Ditto Yossarian in Catch-22. I suppose I must have one, but I don’t know who s/he is.

What book do you return to?
Already mentioned Of Mice and Men and As I Lay Dying above. Maybe Stephen King’s It, Bradbury’s Dandelion Wine—or Nightmares and Geezenstacks, a horror anthology of short stories by Fredric Brown (the first and greatest practitioner of what is now called “flash fiction”).
Bio: Anthony Ambrogio, 66, life-long resident of Detroit (and environs) until January 2015, when we moved to Cape Cod. Major claim to fame: Married to poet-novelist Anca Vlasopolos; two daughters. Minor claim to fame: numerous articles and reviews in periodicals like Midnight Marquee, Monsters from the Vault, and Video Watchdog. Strives for fiction-publication credits but so far has only a very few short stories to show for it. (Photo attached.)
Posted by pattinase (abbott) at 7:00 AM

Oh, some of the books you love and return to are such classics!! And a nice variety too!

I just finished The Nuns of Sant'Ambrogio and it is indeed a slog. I don't think it's the author (Hubert Wolf's) fault but his book has been marketed and publicized as "racy goings on at a convent" when it's really more about church procedure when investigating claims of sacrilege. Oh well, that's what I get for assuming I was about to read a "sexy nuns" book!

Btw, there's quite a bit in Stewart O'Nan's West of Sunset about Firzgerald's work adapting Three Comrades for the screen.

Nice bookshelves. Faulkner is not my taste but some of the others are.

I see we would disagree on Faulkner and Hemingway, but such is the way of the world. :)