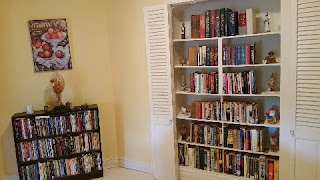 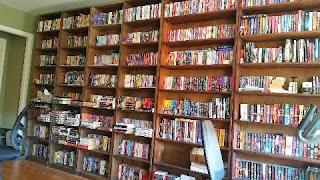 Literally on my nightstand?  None.  I never read in bed,.  But here are a few of the library books on the shelf behind me in the den:  SIX AND A HALF DEADLY SINS by Colin Cotterill (Dr. Siri Paiboun); TRIGGER WARNING by Neil Gaiman (halfway through these stories); BLOOD SWEEP by Steven F. Havill (Posadas County, New Mexico); SLOW HORSES by Mick Herron; AFTER THIS by Alice McDermott; THIEVES FALL OUT by Gore Vidal (as "Cameron Kay"); A HAND REACHED DOWN TO GUIDE ME: Stories and a Novella by David Gates (I really liked his previous books).

And some of my own books: GAME OF MIRRORS by Andrea Camilleri (Insp. Salvo Montalbano); SONS OF SPARTA by Jeffrey Siger (Ch. Insp. Andreas Kaldis); DEATH HAS AN ESCORT by Roger Torrey (pulp reprints); PLAGUE SHIP and POSTMARKED THE STARS by Andre Norton (Solar Queen series), among many, many others.
Who is your all-time favorite novelist?
Now this one is impossible for me.  I could probably narrow it down to 25 or 10 but never one.  And there are different authors in different categories (and on different days).  A few I would definitely include (and I'd read anything they'd written, even the less good stuff) are  Dashiell Hammett, Evan Hunter/Ed McBain, Donald Westlake and Elmore Leonard,   Among current mystery writers I always look forward to (a very long list) are Michael Connelly, Bill Crider, Bill Pronzini, Marcia Muller, Margaret Maron, Andrea Camilleri, Lawrence Block, Peter Robinson, Archer Mayor, Colin Cotterill, John Harvey, Joe R. Lansdale, James Sallis and Lee Child, but believe me, this only scratches the obvious surface.
**I've been reading at least one short story a day for close to 20 years now (you can do the math) and would add Chekhov and John O'Hara to my favorites list.  Among current mystery writers I would read any short story by Brendan DuBois, Ed Gorman, Doug Allyn, Clark Howard or Terence Faherty, and the late Edward D. Hoch was a favorite.
What book might we be surprised to find on your shelves?
Good question.  I have very eclectic taste so nothing should surprise you, but how about Leon Edel's five volume biography of Henry James or the DIARY AND AUTOBIOGRAPHY OF JOHN ADAMS or Trollope's Parliamentary/Palliser novels the SCIENCE FICTION HALL OF FAME volumes?  Then there are hundreds of romantic suspense and paranormal romance novels, but those belong to my wife Jackie.
Who is your favorite fictional character?
It would be tough to top Holmes & Watson but I also like Salvo Montalbano, Andy Dalziel, Abel Jones (in Owen Parry's Civil War series), Dr. Siri Paiboun, Harry Bosch, Harry Flashman (in Fraser's series), Parker (the Richard Stark series), Jack Reacher, Matt Helm and Walt Longmire.
What book do you return to?
I have so many hundreds of books waiting to be read that I rarely reread, but when I do it will probably be a favorite like TIME AND AGAIN (Jack Finney) or NEVERWHERE (Neil Gaiman) or THE STAND (Stephen King - yes, I read it twice).  There are plenty of favorite series that I have on my shelves to reread someday, like Sjowall & Wahloo's Martin Beck series, or McBain's 87th Precinct or Westlake/Stark's Parker or Frank McAuliffe's Augustus Mandrell books.
Bio?  For a long time I sold secondhand mystery books.  We'd travel to Britain every summer and scour the land for books, which I'd ship home and sell by mail order during the year.  I also had a mystery fanzine (The Poisoned Pen) which I self-published in the pre-computer days (late 1970s and the 1980s), and was a member of DAPA-EM (along with such luminaries as Bill Crider, George Kelley and Rick Robinson) for many years.  My wife Jackie was a teacher and school administrator for 34 years.  We're retired.
Posted by pattinase (abbott) at 8:07 AM

Jeff's shelves appear to be entirely too orderly.

Btw Jeff, I read somewhere that for whatever reason the rent-control law in New York failed to be renewed. I hope that won't affect you and Jackie in your obviously charming and book-filled home!

Thanks, Patti, and great having dinner (and dessert!) with you and Phil yesterday.

Don't worry about us, Deb. This has happened before and when they do pass a bill they make it retroactive to cover the period missed. We are rent-stabilized (different than rent controlled - for that you have to be living in the same apartment since before 1970, I believe), meaning landlords can only raise the rent a certain specified percentage on a one- or two-year lease. This year's raise hasn't been decided yet, but this past year was about as low as it has ever been - a 1% raise on one year leases.

The change from Bloomberg to DeBlasio has certainly worked to tenants' benefit!

FYI, the "wall of books" has one more of the bigger bookcases to the right of the picture. It is in the den. The other picture is in the hall. The smaller bookcase in the hall is the one thing I have where I have read almost all the books (other than the odd Simenon). And yes, there are a couple of other unseen bookcases as well.

At least I've gotten rid of the boxes of books I used to have in the closet and either put the books on the shelves, sold them or donated them.

Nice. Lots of shelves (how many running feet, I wonder?) full of books. I don't read in bed either, but I have a small bookcase in the bedroom because there is a comfortable reading chair and lamp there, and it's my so-called TBR bookshelf.

a little Andre Norton is nice to have.

Jeff Meyerson inspired me to read a short story a day a couple decades ago. It's a great habit to develop! And I'm with Charles: a little Andre Norton is nice to have close at hand.

Oh, look at those wonderful shelves!! Fabulous! I like your choices of books, too.

Terrific bookshelves! I'd love to go through Jeff's collection.