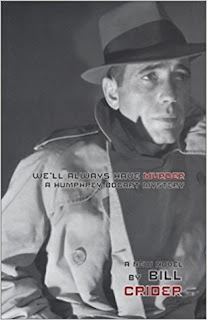 For years, checking out Bill Crider’s Pop Culture Magazine has been part of my daily routine. It’s one of the most entertaining sites on the Internet, IMHO. Years ago, I even sent Bill a couple of items that he posted and kindly gave me credit for. I started reading his blog posts because I was already familiar with his work as a mystery writer and figured his posts would be just as good―and I was right. For the past year, he’s been posting about some serious health issues, which seem to have reached a critical point. A bunch of Bill’s friends have decided to dedicate the latest edition of Friday’s Forgotten Books, and this post is my contribution and tribute.
This book is really forgotten―even the author says so, according to this interview: “Thanks to my agent, who got me the job, I also got the chance to write a private-eye novel with Humphrey Bogart as a featured character. It’s one of my better books, though nobody has heard of it—We’ll Always Have Murder is the title.” Subtitled “A Humphrey Bogart Mystery,” the book’s protagonist is Terry Scott, a war veteran and low-rent PI who works for Jack Warner to keep his stars’ peccadilloes out of the limelight, if not out of trouble. In this case, the star is Bogart, who’s been accosted by a sleazier PI for blackmail purposes. Scott meets Bogie, begins investigating with his help, and runs into multiple murders. Crider puts in plenty of apt allusions to and quotations from The Maltese Falcon, Casablanca, and The Big Sleep, some of them from Bogart, as this odd couple travels through both the glittery and seamy pockets of late 1940s Hollywood. Both of them come off as real, fallible, but ultimately capable investigators as they deal with Mayo Methot, Bogart’s real life, pre-Bacall wife, and a motley collection of stars, studio execs, wannabes, stunt men, and other movie types.
I really liked this book. I’ve always enjoyed period stories about Tinseltown, like Stuart Kaminsky’s Toby Peters series and Edward Wright’s wonderful John Ray Horn novels. We’ll Always Have Murder provides ample wry humor without caricaturing his Hollywood characters, who were and are bizarre enough in real life; it also adds a few darker strokes that emphasize the seediness beneath that tinsel. My sense is that it was intended to be a series, but apparently that never happened―my only disappointment. I urge you to read We’ll Always Have Murder―there seem to be plenty of used copies to be had from the usual suspects.

As for Bill Crider, I’d like to think that, like his books, he may still have a few more surprises for us before the end, optimist that I am. Whatever happens, Bill, we’ll continue to treasure all of the work you’ve accomplished as a writer and a person―and thanks for the ride.
Posted by pattinase (abbott) at 12:12 PM

Why there are no comments yet? Very good read.