A late one from Eric Beetner and Victoria Kemp

BTW for those who steer clean of Facebook, there are many, many tributes to Bill on there. 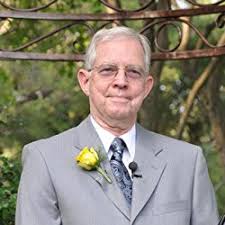 The writing world is paying tribute to Bill Crider today, and a more deserving man I don’t know of. No writer would see such an outpouring of admiration only for their books. Bill is a kind and generous man who is a friend to all who take pen in hand to battle the blank page into submission.
I wish I could say I knew Bill better, but I’m proud to call him a friend. Bill’s been extraordinarily kind to me. From stepping up and donating a signed book for my children’s school auction several years back to more recent favors he’s done, Bill has never said no.
When I asked him to join the ranks for the Unloaded 2 anthology, he said yes. When I started my column for the Film Noir Foundation newsletter all about noir fiction, I knew Bill had to be my first guest and he said yes. When I cornered him in Toronto and recorded him for the podcast, he didn’t hesitate, just said yes.
Bill is always quick with a compliment for another writer. He champions unsung books both contemporary and vintage. He gave me my favorite blurb of all time, completely unsolicited. And I don’t say that now in the face of losing Bill soon to cancer, I said it at the time and beyond the kind words, it was who was behind the words that added to my feelings.
Bill is the kind of writer I aspire to be. A craftsman who isn’t pretentious about it. A prolific wordsmith who keeps his head down and keeps churning out the ideas. A master of multiple genres. He bridges the gap between the classic pulp period and today like his contemporaries Lawrence Block, Ed Gorman, Max Allan Collins. Known as one of the nicest guys in the mystery writing world and that is a tall mountain to sit atop.
So it is sad to say goodbye to Bill, but at least we get the chance to let him know how appreciated he is. My story is not unique. He was good to all of us. I’m just glad I have my own stories to tell about Bill. And I will continue to tell them, and to read his words because with those in the world he will never truly be gone. But we’ll still miss him.

I've never met Bill Crider. I just read his books and then started following him on Facebook. He posted regularly, both as himself on his personal and on his author page. His author page was a fun amalgam of vintage advertisements; songs of the day; announcements about his writing, including his appearances at various mystery cons around the country, not to mention interviews with all his mystery writing buddies. His personal page was a wonderful glimpse into the life of a man who loved his wife (who died too soon) and his cats, the VBKs, Gilligan, Keanu and Ginger Tom. He wrote prolifically, separate series: Sheriff Dan Rhodes; Truman Smith; Carl Burns and Sally Good, not to mention co-authoring books with Willard Scott and several stand-alone westerns. His writing seemed to me to illustrate who he was as a man, plain-spoken and straight-shooting.

Cancer sucks. It has taken too many people from my life. And, now, I will lose an author whose writing has taken me places I would never go by myself.

Patti, I just found this thread this morning, Saturday, and have enjoyed reading all these reminisces. I have a couple of my own to recount. I met Bill at a conference and found out he lived in Alvin, which was close to where I grew up. We had some chat about it. A couple of years later I started looking for an agent for a book I had written. It seemed daunting and it occurred to me that it might be clever to have a "blurb" to put in the query letter. Since I was writing about an older chief of police in a small town in Texas, I thought of Bill. I wrote and asked him if he would consider reading the book and giving me a blurb for my query letter. In typical Bill Crider fashion, he said he'd be glad to, although he didn't know whether it would be worth much! I knew it was worth gold. And it was. The agent I signed with was drawn in by his blurb.

Fast forward a couple of years and a few books under my belt. I was doing a signing at Murder by the Book in Houston, and who walked in, but Bill! I couldn't stop grinning. I couldn't have been happier. What a hero!
Posted by pattinase (abbott) at 10:39 AM

That's the Bill I know

I see you found Vicci's from those whose items I hosted...she did express the anger at Bill's fate we all share, I think, rather succinctly. (I know her through Fiction-L, a librarian-heavy list...she's a Texas librarian.)

Jim Cameron's new review is still missing from the blogroll. He's mostly a jazz blogger, but as he notes he was a POP CULTURE MAGAZINE regular reader in correspondence with Bill, who picked up a few entries for his blog from Jim over the years...Bill and Jim, like you, Patti, and Jerry and frequently others who might read this, have been regulars on the Monthly Underappreciated Music roundelay, too...

What a great tribute!

Thanks for adding me, Patti. I've truly loved getting to know Bill