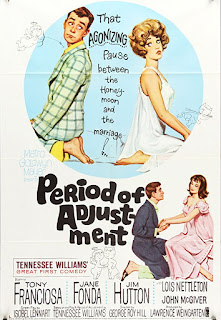 George Roy Hill directed this odd little movie from 1962. Jane Fonda plays a nurse and Jim Hutton a vet suffering from PTSD. Their marriage is sudden and they end up at the home of his former Army buddy played by Tony Franciosa. Tony has his own problems because he married for wealth,
The key to it is the screenplay was written by Tennessee Williams and all of the themes that show up in his plays get a a look-see here: the impotent male, the trouble with Daddies, the hysterical players. Franciosa gives the best performance of the lot. Perhaps because he doesn't lay on a Southern accent with a trowel. Jane Fonda complained her makeup made her unrecognizable and it did. Maybe it was all for the best though.
Posted by pattinase (abbott) at 7:00 AM

When it comes to fans of Tennessee Williams (who only wrote the original play by the way, not the screenplay, that was by Isobel Lennard), I always reckon this is the one that separates the men from the boys :) Me, I remember rather enjoying it in a very minor key ...

Oh, I'd completely forgotten about this one, Patti. Thanks for the reminder.

Actually, we first saw this several years ago - I know I didn't see it when it was first out - and found it not so good but watchable. I thought Franciosa was odd casting but he did a fine job. None of the main players (including the director) were at their best yet.

It's been decades since I saw PERIOD OF ADJUSTMENT. I'll have to see if it's on HULU.

What do you think of the GOLDEN GLOBE nominations? Too many quality movies, actors, and directors were ignored.

"Major" commercial awards always ignore as much of the best work as they can.

I saw most of this one on TCM or FXM or perhaps CineMoi some months ago, and should see it all sometime. I like Hill's work a lot, and have nothing against any of the other principals...and there were MUCH worse adaptations of Williams's work on film to come. Oh, boy, much Much worse. And most of them not too many years later.