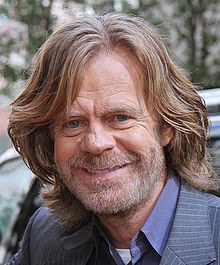 I am sure most people would choose a character from HOMICIDE or THE WIRE or BREAKING BAD. But to me the worst character on all of television is Frank Gallagher (William Macy) on SHAMELESS. Over the course of the show, he has murdered, told his young son (falsely) he had cancer, stole money from his kids, perpetrated innumerable scams, used his kids in every way imaginable. It goes on and on. It is bad enough when a villain does harm to adults but Frank hurts his own kids over and over without giving it a thought. Sadly most of his antics seem all too real. If he has any good characteristics I have yet to see them.
Posted by pattinase (abbott) at 7:00 AM

Patti, I don't know any since I don't watch serious television dramas, though I can't think of anyone worse than Frank Gallagher. It almost spoils my good impression of Macy.

Not even close: it has to be Vern Schillinger on OZ, as portrayed in chilling fashion by the ubiquitous J. K. Simmons.

The guy was scary.

I know we are talking quality programs but, by chance, I was walking by a hospital television playing The Young And The Restless. Eric Braeden's Victor Newman has to be one of the foulest characters in all of TV history.

never saw either show so I can' t compare!

pattinase (abbott) said...
This comment has been removed by the author.
8:17 AM

Patti, Schillinger was a neo-Nazi white supremicist. They put a middle class lawyer named Tobias Beecher who mowed down a child while driving drunk in his cell, and Schillinger rapes him and carves a swastika into his backside, and eventually turns Beecher into almost as big a monster as he is.

OZ was the kind of show that is really hard to watch but almost impossible to turn away from. Tom Fontana filmed it in lower Manhattan. There were some terrific actors in it over the years. Check out the DVD. If you watched THE WIRE and BREAKING BAD and other similar shows you can take this one.

I haven't seen any of those shows. JR is probably still my favorite TV villain.

The irony for me is that J. K. Simmons does comic roles so wonderfully. I have seen the UK version of Shameless, and Macy's character in that series (David Threlfall) is nearly endearing.

Yes, he is the consummate actor.
Phil always said I couldn't take it but maybe I will give it a try, Jeff.

As a follow-up to HOMICIDE, OZ almost reveled in nihilism at times, but it was pretty damned compelling, and certainly scored its necessarily vicious satiric points (it was, among other things, an indictment of our penal system...and with a [almost necessarily vaguely Brechtian] musical episode!)

Gallagher in SHAMELESS US was capable of resisting the temptations of incest, something some of our real-life notables are being convincingly accused of not being having been so good about of late.

And at least Gallagher also stepped away from incest with an estranged adult daughter, rather than the children, whether biological or in loco parentis, in the incidents I refer to.

WIKIPEDIA is good for the likes of fictional characters from popular soaps:

Victor Christian Newman (born Christian Miller) is a fictional character from the American CBS soap opera The Young and the Restless. He has been portrayed by Eric Braeden since 1980. Initially a guest character who was to last for eight to twelve weeks, Victor has evolved into the soap opera's leading male figure. Created by William J. Bell as a "despicable, contemptible, unfaithful wife abuser", the character was planned to be killed off and never heard of again. However, after Bell saw Braeden's performance, he decided to sign the actor onto a contract. Braeden was hesitant to work on a soap opera, but eventually signed a contract, and has remained on the series as a regular cast member for a total of thirty-three years. The character is widely described as ruthless, and while loving to those he holds dear, is considered a villain. Over the years, he has also been the center of several controversial plots and relationships. [more at the entry]

I would go with Billy Bob Thorton in the TV version of FARGO.