Forgotten Movies: DARK AT THE TOP OF THE STAIRS 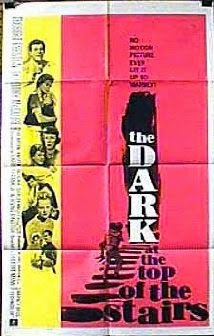 From 1960, this is one of those films that I saw at an age when I have little insight into what was going on. I've never seen it again. But as with other books and movies from the time that I was 12 or so it formed my ideas of grownup life.

Set in the 1920s Robert Preston plays a guy who's lost his job, has a dissatisfied wife, and two discontent children. Dorothy McQuiire plays the wife and Shirley Knight, his daughter.

It began as a play by William Inge, directed by Elia Kazan. The movie was directed by Delbert Mann. It's on you tube in its entirety. This is the sort of movie that was done well in that era. We seem to have lost the knack in the US at least for telling these stories. I guess they were melodramatic but at least they seemed interested in the lives of ordinary people.
Posted by pattinase (abbott) at 7:00 AM

I wrote about this one a year or so ago. I was older than you when I saw it and thought it was really good. I doubt it could get made these days.

Oh, I have to admit I've never seen this one! Interesting.

I haven't seen it yet...but it probably wouldn't be a major studio's release (except from the "indyesque" division for those that still keep them), but probably could get made...

You and Bill Crider nailed it. I was correctly corrected when I said in my recent post that Stephen Crane was a master of realism. Somebody pointed out that he was a master of Naturalism. True enough. But I grew up when both strains were deeply embedded in our national literature. Norman Mailer, Sherwood Anderson, John O'Hara, Carson McCuller etc etc etc. Our national literature touched every aspect of our lives. Inge is a good example. At his best he was his own man, at his worst Tennessee Williams, Jr. But Dark and Picnic and Come Back Little Sheba defined eras as well as people. We're the sadder for not having such a literature today. This sermon is available on the Ed Gorman Mega Church site--sendmoneyfast.com

If it's the one I think, it has the classic line (Preston to his wife), "There wouldn't be any Mavis Pruitt if wasn't treated like change of a nickel around here."

it's been a while but I remember liking this a lot - but then, always been a big fan of Robert Preston - thanks Patti, time for a re-visit.

Coincidently, I just finished Sam Kashner and Jennifer MacNeil's The Bad & The Beautiful: Hollywood in the Fifties, which features an entire chapter on William Inge. He had enormous success in the fifties and then, just as quickly, his style of writing fell out of favor. He eventually committed suicide--a hopeless alcoholic with a pile of rejection notices. A sad end to someone who had captured the zeitgeist of an earlier era.

The last few lines sound like you're talking about Robin Williams. Alas.

I truly didn't see that--wow, it's so obvious. Yes, both of their deaths were incredibly sad.

Except...Williams still had a career. Interior things mounted up.

Except THE crazy ONES imploded.

Yes, but he was still in demand. I imagine it didn't cheer him that his sitcom was cancelled, but that happens to even the most successful actors fairly frequently.

And now a forlorn list of birthday celebrators on IMDb find their photos under two larger ones noting the death of Williams and Bacall. And for some reason, the one who leads off (not chronologically nor alphabetically) accidentally killed someone.

From everything I read yesterday the man never had a happy moment in his life.

I feel like I saw this when I was young as well. Is it one of those movies that was always on TV in the early days of cable?