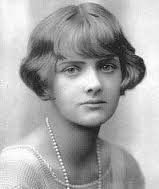 You can take all the work of one author with you to an island. Who would that author be? Questions to consider: it should be a writer who has written a lot and perhaps one who writers eclectically-in other words doesn't write the same novel over and over. And one who gives you something to chew on.

Phil immediately chose Shakespeare but he's not my muse.

With that in mind, I am going to choose Daphne DuMaurier. I haven't read all that many of her books and stories but have very much liked the ones I have.

Here is her output:

At least you would be smiling a lot.

Nice choice, Patti! Mine would be Agatha Christie.

It would be really tough to make a choice. I'd want someone who wrote a lot of books and preferably in different styles and genres.

Off the top of my head I might pick Evan Hunter/Ed McBain. But I'm not totally sure.

Jackie would go with Nora Roberts/J. D. Robb. She's read well over 100 of her books.

I'd choose a writer with a large output that I haven't read a lot--so that would eliminate Trollope since I've read so many of his books. Probably Balzac--in translation, of course.

My favorite du Maurier is The Parasites--about which I wrote my first FFB. I also wrote about Flight of the Falconer, which I found to be a bit of a misfire.

I'm with George on Wodehouse, too. However, I'd take a pile of fast-paced novels like those by Jack Higgins, Mack Bolan, James Hadley Chase, Edgar Rice Burroughs, and Louis L'Amour.

I going to stun you all with my choice. Muriel Spark! She writes with intelligence, economy and is often powerful in her story telling. Plus, she wrote in so many styles and categories. She did it all -- mainstream novels, ghost stories, crime novels, children's fiction, plays, memoir, literary biography, etc. etc. I'd never be bored and I wouldn't be tearing my hair out regretting having taken only a pile of murder mysteries.

Muriel Spark is a good choice. I've read several of her novels and all of her short stories.

Deb, I thought of Trollope (I know you and George are fans) because I haven't read much of his stuff.

I love Muriel Spark. Everyone of her books and short stories.
Have never been able to finish a Trollope. And I have so many friends who love him.

Another non-stunned Spark fan, here. Spark and Du Maurier not too distant from each other in appeal, I'd suggest.

Avram Davidson will shock No One, if I mentioned him...he is also quite diverse in his approaches to the work he took on (including ghosting for Ellery Queen). (Do we get to cheat and take all his wonderful editorial work, too?)

Alternates would include Kate Wilhelm, Damon Knight (though he wasn't as prolific as many, and his novels till the end of his life tended to be weak), Joanna Russ (also not too prolific), E. F. Benson (from horror to MAPP AND LUCIA), John D. MacDonald, Bruce Jay Friedman (not hugely prolific), Fritz Leiber, Theodore Sturgeon, Carol Emshwiller (all medium-prolific but all rather impressively diverse), Barry Malzberg or Joyce Carol Oates (go, Syracuse U, Eng Dept, Class of '60!) if the stranding is mostly pleasant (too depressing, despite the wit, otherwise--Algis Budrys's fiction similarly, and he wasn't prolific beyond his first decade as a writer), and Wodehouse wouldn't be the worst alternate choice. Robert Bloch would be fun, particularly his work after he shook off Lovecraft as primary model. Robert Benchley. Jean Kerr if she had written more. Jorge Luis Borges (medium-prolific, and the most poetical so far...William Stafford might be only mostly-poet in contention, or him and Stephen Vincent Benet.) G.B. Shaw.

When G.B. Shaw was asked what ten books he'd take to a desert island, he supposedly replied, "Ten blank notebooks and a good supply of ink."

Also, going for an author who wrote a large body of work, John Creasey since I've only read about a tenth of his work.

Todd has some pretty good choices and Prashant is on the right track, although I would substitute Murphy/Sapir's Destroyer for the Mack Bolan Executioner series.

I have not read a lot of Creasey either.

I'm going with Terry Pratchett. Lots of books, escapist and fun. Loads of different lead characters. Perfect for being stuck on an island.

If you start digging into any of Creasey's series you'll discover like most absurdly prolific popular fiction writers he tended to recycle his plots. The Dr. Palfrey series especially has several books with very similar storylines.

Isaac Asimov was prolific, but his range was somewhat limited (science fiction, science non-fiction, and mysteries).

Edgar Rice Burroughs was prolific and wrote in different genres, but he (like Creasey, and a lot of pulp writers) tended to recycle plots.

So I'd pick Louis L'Amour. Prolific, more versatile than Asimov, and not quite as repetitive as Burroughs.

Saul Bellow, for sure.

I'd go with Shakespeare, followed closely by Arthur Conan Doyle. Conan Doyle has not only the Holmes stuff, but also the hilarious Brigadier Gerard stories (and other stuff, but those are the ones I love). Martin Amis is my favorite writer, and while not as diverse, I relish re-reading him, finding new turns of phrase to love each time.

If I could pick two, I would pick Rex Stout and Len Deighton. Stout I can read over and over. But if only one, then Deighton, because I only discovered him in 2012 and have lots more to read yet, and can reread what I already have read.

Anon: "So I'd pick Louis L'Amour. Prolific, more versatile than Asimov, and not quite as repetitive as Burroughs."

Nope. Asimov wrote a fair amount of fantasy, literary annotations, collected jokes, wrote (mostly pretty dull) limericks, lots of non-scientific historical writing, autobiographies, eco/sociopolitical analyses (notably his last book with Frederik Pohl, OUR ANGRY EARTH) and even a bit of criticism, even if he was ostensibly uncomfortable with that sort of writing. And that doesn't even take into account his editorial work.

Then there's the example of Robert Silverberg. Creasey/Simenon-level prolificity.

Marijane Meaker would be an interesting (and very diverse) candidate.

Wouldn't be Shakespeare for me either (though probably keep thinking it should be) - maybe Faulkner, Graham Greene, more likely Charles Dickens