In the fifties, I came home for lunch, eaten on the living room coffee table with my mother, and watched her three soaps: LOVE OF LIFE, SEARCH FOR TOMORROW and THE GUIDING LIGHT. SEARCH was my favorite--only 15 minutes then, perhaps because it was the only one I saw in its entirety. And I also identified with the show's daughter, Patti enough to change the spelling of my name. (Actually in those days I was mostly called Patsy).

SEARCH was on CBS from the fifties until the eighties and centered around Joanne Tate, a widow at first, and her young daughter. Many of the episodes just featured her going over her problems with her neighbors over a cup of coffee. This formed my ideas of adult life because when I came home from school, my mother was usually having a cup of coffee with one or two of her friends. 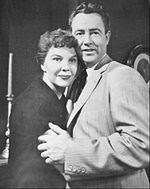 There are some videos on you tube, but mostly from the years after I watched the show. When the shows ended each day, my mother and my grandmother often discussed the day's happenings. Better than Judge Judy or reality shows, I guess, but just barely.

Patti - There were definitely some dramatic 'soap operas' back in the day, weren't there. And that was before certain topics were considered appropriate for TV.

Never watched this one, nor did Jackie. In the 60's she watched Dark Shadows but then watched Another World until it was cancelled, then switched to Days of Our Lives. At times she watched Young and the Restless (when it first went on, I believe). We watched The Edge of Night, which was actually a mystery series as well as a soap, the last few years before it was cancelled.

And in the mid-60s she watched the teen soap Never Too Young.

I'm almost ashamed to admit this, but in 1979 I actually changed my college schedule do I wouldn't miss The Young and the Restless. Now you know my secret shame--please don't share it with anyone else!

The funny thing is, once I graduated from college and was out on my own in the real world, even with the advent of VCRs, I never watched soap operas regularly again, but one day about four years ago I was getting my nails done and TYATR happened to be on the TV in the salon. I couldn't believe it, but they were recycling a storyline from the 1970s: Mrs. Chancellor pretends to be dead and watched how few people attend her funeral. "Oh no," I said aloud, "I saw this back in 1979!" I don't think anyone else in the salon was impressed!

I watched ALL MY CHILDREN for many years when the kids were little. You need something to sit down and do and I made quilts while I watched. That was my excuse anyway.

Someone posted the last ever episode of Never Too Young on youtube. Both Jackie and I had remembered the theme song.

And stay off my lawn!

My mom's favorite was "The secret storm."

I have never watched an episode of a soap opera, at least a daytime one. I did watch a few episodes of Dallas before I gave up on it for excessive silliness.

My mother was a soap opera addict. She watched Guiding Light, As the World Turns, Another World and the spin-off Somerset (which I believe was very short lived). She used to call them "her stories." Never called them soaps or soap operas. I still remember seeing Kevin Bacon and Meg Ryan in their first acting gigs on Guiding Light and As the World Turns. My mother never got tired talking about Meg Ryan growing up in a Connecticut town not far from where we lived.

I think they all called them their stories. At some point, "soaps" became the term of choice.

They were called soaps because most or all of them were sponsored by laundry detergents. But how DARE you besmirch Judge Judy? She kicks butt.

Well, they were (originally derogatorily) referred to as Soap Operas from the earliest years on radio, given their sponsorship and perceived tendency to wallow in misery. I enjoy referring particularly to my regular Sunday night viewing (mostly series on CBS, HBO, Showtime and A&E, and RECTIFY of late if I've missed it earlier) as My stories.

Sorry I missed this one earlier! Busy, busy, annoying day.

AMC, actually. About all I catch on A&E of late is LONGMIRE, usually on demand.

My mom hated daytime tv, so television was not on during the day. My best friend's mother watched soaps during the afternoon while she folded clothes, ironed, and did other housework. She'd watch The Doctors, Another World in Bay City, Another World in Somerset (later just Somerset), and Bright Promise. When I was over there, we'd later watch Dark Shadows. But it wasn't until college that I got into The Young and the Restless--and that lasted until I graduated. I was watching it during its classic David Hasselhoff and Wings Hauser years.

I remember THE SECRET STORM. I wonder if most stay at home Moms tended to watch soaps on a specific network. Yes, they are my stories too, Todd.
Sorry about the Judge Judy dig. I am sure she is a worthy judge.

I'm just messing with you, Patti. Judge Judy is flawed enough to join the Supreme Court.

And has the longevity necessary to serve.

Perhaps the saddest thing is that there might now be more years that DIVORCE COURT was being syndicated (definitely including the 1960s version) than not, over the history of television...

Got hooked for a long time on a nighttime soap on BBC, EASTENDERS.

My late grandmother and her friends called them "stories." My guess is that it's because that's what the narrator or announcer called them. When they were breaking for the commercials, the voice-over would say, "Our story will continue after these messages."

I think "soap opera" began as a semi-derogatory term used by people in the broadcast business. Over the years, the general public began using the term, and, by the late 1970's, even their fans began calling them that.

The term "pulp magazine" may have a similar history.