Rewatching the Pilot for THE WIRE

From the very first scene, this series simply leaps to the top of any list one might make of terrific TV shows. A lot of very good series today think that they have to obfuscate what's going on to be edgy.  They dump characters into the scene, not bothering to ID them in any way. They expect you to be patient and somehow remember the few minutes of screen time a character was given episodes ago.

But in THE WIRE, the pilot managed to introduce dozens of characters, immediately showing you who they were and how they fit into plot. Themes were established from the outset; several characters were already given a bit of a back story. But all of this was done in an artful, realistic, edgy way.

Go watch the opening scene on you tube. Wow! 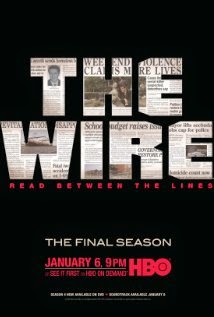 Has there ever been a better series than THE WIRE?
Posted by pattinase (abbott) at 7:00 AM

THE WIRE is about as good as it gets. I'd have to vote for MAD MEN as a close second.

You know, that's one series I never caught up with; I'll have to try it.

We recently bought the boxed set of the entire series as we hadn't seen the later series. We plan to watch it from the beginning Real Soon Now.

The first first scene is such a gem, Jeff.

I've recently started watching this and I can't believe it took me so long. One thing that amazes me is that the first scene - "This is America, man!" - is the most George Pelecanos thing I've ever seen... but Pelecanos didn't write for The Wire until much later!

That line (This is America, man) was not written, as we mean it. The entire scene is a true story, taken directly from Simon's book, HOMICIDE: A YEAR ON THE KILLING STREETS.

Poor Snot. Too dumb to live.

And his name was Snot.

Probably my favorite TV series ever.