I read very little true crime. I prefer fictional crime even if it's based on real crimes. I am not sure why but I think it's because a fiction writer leaves out the boring parts. Or at least a good one does. And the story also seems more remote, less scary.

Megan and Phil and even Josh read a ton of true crime though. Phil just read SAVAGE HARVEST about the gory details of Michael Rockefeller in New Guinea with a tribe of cannibals. Ugh!

I have read a few good ones though and I would chose IN COLD BLOOD as my  favorite. Capote changed the notion of reportage with this one and the Clutter family will always haunt me.

What is your favorite true crime book. 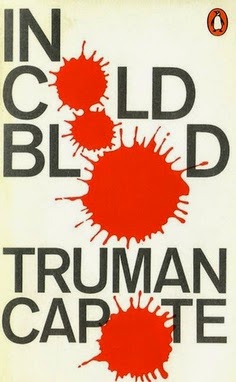 Actually, Patti, you've pictured the cover of the one I like best. You're reminding me too that I ought to spotlight that one.

Like you, I prefer fictional crime. But the best non-fiction true crime book I've ever read was Norman Mailer's THE EXECUTIONER'S SONG.

I think I would enjoy true crime more if so much of it weren't so wretchedly written.

I didn't read In Cold Blood for years after it came out. Then one day I was proctoring a final exam in a room where someone had left the book on the desk. I started reading it and couldn't quit. I'd have to name this one as my favorite true crime books, for sure.

Both IN COLD BLOOD and THE EXECUTIONERS SONG had elements of fiction woven into the text.

Should that not disquality them as "true crime" chronicles?

Not that it's really a favorite per se, but the story of the Tate -LoBiacno Murders and the Manson Family's other crimes related in HELTER SKELTER will be forever engrained in my memory. It's not only one of the most sensational true crime stories in recent history, but a compelling argument for the existence of evil.

Besides IN COLD BLOOD my picks would be Norman Mailer's THE EXECUTIONER'S SONG (probably my #1 pick), Vincent Bugliosi's HELTER SKELTER and Joe McGinniss's FATAL VISION. I also liked Joseph Wambaugh's THE ONION FIELD and Edna Buchanan's two autobiogrphical books, THE CORPSE HAD A FAMILIAR FACE and NEVER LET THEM SEE YOU CRY.

I used to read a fair amount of true crime but I haven't read anything new in years.

Despite the question of veracity, I enjoyed FATAL VISION at the time. And HELTER SKELTER may be the scariest of the lot.

I am not sure what I think about the fictional aspects. I guess it's almost a category of its own. Creative Nonfiction.

I've only read one true crime novel and it was a by a friend. I don't like the genre and don't read it. It's too horrific. I can never get past the fact that these are real people these things happened to.

I also don't read a lot of true crime, but there is a fondness in my heart for the Anthony Boucher-edited POCKETBOOK OF TRUE CRIME. Beyond that, I really enjoyed the true crime books by Clark Howard.

IN COLD BLOOD was my first, in high school, and a favorite. Any of Jerry Bledsoe's books rank high as well, mainly because he's a North Carolina boy and most of them feature crimes in our state.

Ed Sanders' THE FAMILY is also a very compelling true crime story of the Sharon Tate murders. I prefer it to HELTER SKELTER.

I remember reading something about Jack the Ripper a long time ago. I prefer fictional crime stories.

Wow. I thought I'd be piling on with THE ONION FIELD. Best non-fiction crime book I've ever read.

I like to non-fiction crime, but rarely boos that focus on a single crime. Books that give a broader idea of what working in law enforcement is like, such as David Simon's HOMICIDE and any of Connie Fletcher's books. Books that focus too long on a single crime do often get boring, as the reader seems to know everything the cops learned, like a novel where the research is too obviously included.

I saw the film "The Sky Above, the Mud Below" while in college, which is the Rockefeller film during which I think he was killed.

I don't read much true crime, though I did read both HELTER SKELTER and EXECUTIONER'S SONG. I remember little of them, other than I liked and was horrified by HELTER SKELTER. I may have also read ONION FIELDS. Like you I prefer my crime fictional in nature, especially as I like classic mysteries.

I'm with you and IN COLD BLOOD plus Mailer's THE EXECUTIONER'S SONG.

Bugliosi a lot more Creative than he had any right to be...Ed Sanders with THE FAMILY a lot less prone to sensationalism. Of course, Sanders had a basic sympathy with and understanding of countercultural folks that Bugliosi made a point of not having...he could see rather more clearly how the lost kids who clustered around Manson could go so utterly mad and wrong.

Robert Bloch's crime nonfiction I've read is fine; Harlan Ellison's slightly Creative MEMOS FROM PURGATORY is as well; I've reviewed Avram Davidson's CRIMES AND MISFORTUNES for FFB; Elizabeth Hand's account of the attack on herself and how she's coped is more than simply good.

Makes me want to read THE FAMILY.