Some of links won't go up till late in the day because I have to leave the house at 7:30 to go to Grandparents Day at Kevin's school. The ones that show up were from yesterday. Sorry!!

Next week, crime fiction from the fifties. Be there or be square. 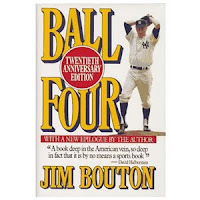 s a book that was read and reread at our house thirty years ago. My son adored it and so did I. It was the first book about baseball that gave an accurate depiction of what went on in the clubhouse, what the players' lives were like, the finances of the game, the pressures put on players, the drugs, the womanizing.

Bouton recounted his year as a pitcher on the Seattle Pilots in 1969--the team's only year of play. It was a tumultuous year for the country as well and Bouton doesn't hesitate to give his views on everything.

Bowie Kuhn called the book detrimental to the game because it blew the fairy dust off. He tried to force Bouton to sign a statement saying the book was fictional, a baseball version of M*A*S*H.

Baseball players also came down hard on him. Pete Rose, that noble player, swore at him whenever he took the mound.

It was not a good year for Bouton on the field, and he is honest about that too. This was one of the great books about sports. That dogeared copy is one book I won't give away.

Please add my link, about Act of Fear by Michael Collins:
http://longwalkwithbooks.blogspot.ru/2014/05/book-collecting-and-use-of-amazon.html

Mine's up now THE PRIDE OF BEAR CREEK by Robert E. Howard.

Bouton got a lot of flak because he told the truth about one of the icons of the game, Mickey Mantle.

I found the stuff about the year with the bad expansion team to be the most interesting.

I've always known Pete Rose was the worst kind of hypocrite. A friend who was a huge Reds' fan told me stories of how sleazy Rose was long before the gambling story broke.

Never been very interested in baseball. I've read a lot of football biographies and a few chess ones. that's about it.

Staggering toward next week.

BALL FOUR was one of my favorite books once upon a time, Patti. However, if pressed, I really cannot recall any of it. I just know I liked it. Probably my first sports book.

Sergio is singular, but his family name remains legion...Angelini...hope it was a fine day at school!

I read it years ago and remember parts of it. When a reporter asked Mickey Mantle what he thought of Jim Bouton's book, Mick replied, "Jim who?"

Thanks for including my review of The Night the Gods Smiled, Patti.

I think Bouton's pitching coach that year was Sam "the barber" Magli who (according to Jim) would yell from the dugout, " Throw this guy something high and inside." Bouton would do as instructed, the hitter would crush the ball and hit a home run, Bouton would return to the dugout and Magli would yell at him, "Why did you throw that inside fast ball? Why?"