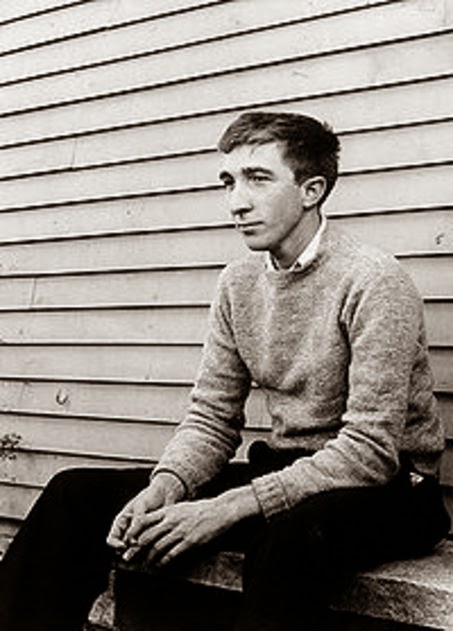 In UPDIKE, the new biography of John Updike by Adam Begley, he quotes Updike as saying, "A real reader, reading to escape his own life thoroughly, tends to have runs on authors." Updike goes on to say he read Gardner, Queen, Carr, Christie, Marsh, Thurber, Benchley, and Wodehouse in this manner (among others).

What writer to you remember reading like this first?

In the summer of '68, on vacation with my parents, I began the journey through Agatha Christie. I could not buy them fast enough. Who lured you in once discovered?
Posted by pattinase (abbott) at 7:00 AM

Patti, first and foremost, the Hardy Boys, followed by (not necessarily in order) P.G. Wodehouse, A.J. Cronin, Erle Stanley Gardner, Oliver Strange, Jack Higgins, Edgar Rice Burroughs, Craig Thomas, and John Irving. I no longer have "runs on authors." It was possible in my youth though I read Irving much later.

The first time (and certainly the most serious time) I threw out my back, I was laid up for a week, so decided to read all the novels and collections I'd stacked up in piles from Theodore Sturgeon and Kurt Vonnegut, those rather similar talents. This might mark the only time in my life I've gone through more than a half-dozen books each by any writers in immediate succession, and I'd read several others by each over the years previously, and some since. Certainly I've read through a few other series over the years...the Fletch novels by Gregory Mcdonald, the Henry Reed and Midge Glass novels by Keith Robertson, Marlowe by Chandler, Leiber's (and Fischer's) antiheroes, Westlake's WEEKLY GALAXY stories, Smith's Topper novels and no doubt others, but never in a serial lump.

It was Agatha Christie for me, too, Patti.

I certainly read as much of Robert Benchley as I could starting when I was about 12.

Oliver Strange as British writer of American-west westerns never gained much of an audience here, apparently. First I'm learning of him.

I have a friend who just read the Topper novels.
Most books I read as they come out--like John D. MacDonald. But I may have read Stout pretty much one after the other. And some writers of smaller outputs.

I think I've read all the McGees...but I have more than half of all JDMc's other novels to go...lucky me.

Simenon is the writer I seem to have read in bunches repeatedly over the years, often reading four or five in a row at the end of a year.

These days if I read three books in a row by the same author I'd consider it a lot. The last extended runs were John Marsden's Tomorrow series in 2009 and Rick Riordan's Percy Jackson series.

Patti, I'd probably be reading a lot more if I hadn't been blogging and reviewing!

Ross Macdonald in my early 20s When I started reading him, I was a science fiction fan. I haven't read sci-fi since.

I started with Tom Swift, then the Hardy Boys, and then switched to science fiction writers for years: Asimov, Heinlein, Simak, Vance, etc. In the 1970s I switched back to crime fiction reading everything by John D. MacDonald, Ross Macdonald, Chandler, Hammett, and dozens more. Once I find a writer I like, I want to read everything in a binge.

Patti, I read Indian fiction and nonfiction occasionally and R.K. Narayan and Salman Rushdie are two of my favourite fiction authors. My reading of other eastern writing is very poor. I do, however, read a lot of Indian and other oriental philosophy, and a bit of western philo too, like James Allen and Meister Eckhart.

Prashant C. Trikannad said...
This comment has been removed by the author.
9:42 AM

I think I read Nancy Drew as they came out-or at least sort of. There is nothing more thrilling as a kid than to find a writer you love with a lot of books.

So many have said "when I find a writer I like…" Yes, me too.

I started serial reading with The Hardy Boys, I guess, then all of the Sherlock Holmes stories/novels in a row. Then Robert Heinlein, Arthur C. Clarke, Isaac Asimov, Ray Bradbury, Robert Howard (Conan books), Fritz Leiber.

Stuck in a mountain cabin with nothing of my own to read, I tried a Christie that was there and then read about twenty of them in a row. I did the same with the Travis McGee books, and Chandler, Hammett, Pronzini, Stephen Greenleaf. I read the first 5 Gideon Oliver books by Aaron Elkins over a three week span, a half dozen Allingham books in a row, and all of the Tony Hillerman books available at the time one after the other. Boy, was that enjoyable!

I also, when a young sprat, read a publisher's books in a row: the Winston Science Fiction series.

The only one I can recall is Stephen King. I also went on a Hammett spree but there was not as many books to sustain me.

Oh, as I read comments before posting mine:
Vonnegut in high school.
Richard Stark.
My uncle collected Hardy Boys prints as a kid and many of those ended up with us.
The Three Investigators series.

I would never do it now. I read more quickly then.

I just remembered the very first series I did a run on: the Freddy the Pig books by Walter Brooks

Mine may have been MRS. PIGGLE WIGGLE and UNCLE WIGGLEY.

I just remembered that I zipped through the Sword of Shannara books when in elementary or middle school. I remember very little about the stories.

As a teen I read Ian Fleming, Harold Robbins, and Mickey Spillane. Many years later it was Rex Stout and Chandler.

Marcel Proust -- he's basically got one l--o-n-g book, so that was straightforward.