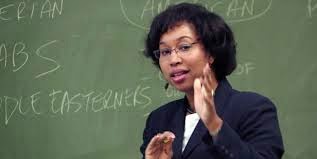 IN UPDIKE, John Updike reports that in his four years at Harvard, he never had a female professor. What about you? I went back to college in the nineties and had many female professors. In the late sixties, none. But Updike was at Harvard in the fifties. What was your situation?
Posted by pattinase (abbott) at 8:30 AM

Patti - I had plenty of female profs actually, although in undergrad. school I had more male than female. And where I work, there are as many female as male profs. I hope that means things are more equitable now.

In the early 1970's at Hunter College (CUNY) I had many female professors - I took mostly English and history and most of my best teachers were women.

Patti, I had many female teachers and lecturers in school and college. In fact, some of my best teachers were women who taught me English, History, Economics, and Accounts. Teaching is a popular vocation among Indian women.

I was at The University of Texas at Austin as an undergrad (1959-1963). I had female professors in quite a few classes, including English, history, and education. In my public school education, I didn't have a single male teacher until 7th grade, and even after that most of the teachers were female.

Perhaps once past the fifties, that began to change. Or at least at state schools like we attended.

College in the late seventies/early eighties (state schools)--lots of female professors across all subjects. My guess is state schools, being less prestigious for the most part and undoubtedly paying less than the Ivy League, were more likely to hire women. Interestingly, there is a reverse concern in K-12 schools where, especially in the lower grades, there are few male teachers and children who are already growing up in fatherless homes are sometimes in high school before they interact with any positive male role models. Oh, I could write a book....

When Jackie started teaching in the early 1970s her elementary school had what would have been considered at the time an inordinate number of male teachers, as there was a big influx of guys who wanted to avoid the draft.

Like Bill I never had a male teacher until junior high (7th grade).

My college years fill in between Bill and George, 1964-1968, and I only remember one woman professor, in a math class. As an English major I had a lot of reading and writing classes, all taught by men (I went to the University of Arizona). At Otis, getting my MA I did have woman teachers.

There was one male teacher in my elementary school. Likewise twenty years later, my kids had just one in theirs. Plenty of both male and females in jhs and hs. The majority of my college courses came in the late eighties and nineties when things had changed.

At UCLA in the 1960s female professors comprised probably thirty percent of faculty for general introductory survey courses. (I took few science courses). By the time I was an upperclassman and taking exclusively film classes, perhaps ten percent were women professors, though female T.A.'s were much more prevalent.


At L.A.'s Southwestern University College of Law where I graduated from in the mid 1970s, female law professors were somewhat less less than fifteen percent,

I was in college from 1979-1983. I had four female intructors, all in classes that were not in my major. None of them were professors, they were all lecturers. Most of the women professors were in the departments of Foreign Language, Fine Art and some sciences. At the time I attended there was only one woman professor in the English Department and none in the Theater Department which had only begun officially in 1979. Muhlenberg College in Allentown, PA where I went was kind of an old school private college still retaining its male only aura (there were no sororities until the mid 1980s!) even though it was co-ed since the 1960s.

(BTW: the "prove you're not a robot" word for my comment is University)

This takes me back, and not in a good way. When I started at Princeton in 1971(something I don't admit to just anybody, BTW), the first women to enter as freshmen were only juniors. The hiring of women faculty was also a work in progress. Senior faculty were men without exception, and I can dimly recall a few junior women. I had no classes with any of them.

Things did not go smoothly. One of the less objectionable professors was a man who treated the women students with impeccable fairness except for his insistence on addressing them as "Mr." To this day some alumnia are enraged about coeducation, and not all of them predate it.

I truly think the Ivy League lagged behind in progressive thinking.

What's an Old Boy's Club for, if not condescension reaffirmed?

State unis in Hawaii and Virginia had quite a mixed bag of genders in all the departments, though still a tendency toward men in the physical sciences.