We were hardpressed the other night to think of too many TV couples that had great chemistry. The discussion usually demands that the couple be in the pre-marital stage of their relationship because the writing usually doesn't emphasize romance after that. The Taylors on FRIDAY NIGHT LIGHTS had a great marriage but we didn't get excited about it.

We could really only come up with three: Ross and Rachel on FRIENDS and Sam and Diane on CHEERS and Jim and Pam on THE OFFICE. The only married couple we came up with predates most of you-Paula Prentiss and Richard Benjamin in HE AND SHE.

And I have never seen a homosexual couple with chemistry on any show--that's too bad.

What other TV couples were believable as lovers? Doesn't have to be a sitcom. Extra points if it isn't? Dramas seem to have more trouble cultivating romance than sitcoms. 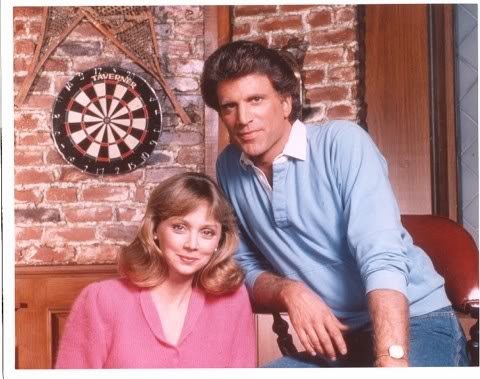 RE: Friday's FFB theme on crime novels of the 1950s. To save me from checking out the date of your selection, could you indicate the year it was published in the heading. Thanks!!
Posted by pattinase (abbott) at 7:30 AM

Hmmm... David and Maddie on Moonlighting?

Mulder and Scully in THE X-FILES?

Chad Eagleton said...
This comment has been removed by the author.
8:18 AM

I’ve always said that Gomez and Morticia were the only married couple on TV I could buy had children.

Bill and Sookie on True Blood have good chemistry, which probably explains why they got married in real life.

I wouldn't put Sam and Diane in that category at all.

I'd say Castle and Beckett have great chemistry, which is why they do everything possible to put off the wedding.

David and Maddie had chemistry, yes, but they apparently did not get on and that info spoiled it. Same with Remington Steele and Laura Holt.
Mulder and Scully and Bill and Sookie are great examples. And although they are not a couple on MAD MEN John Slattery and Talia Balsam, married in real life, have great scenes. I haven't watched CASTLE enough to judge. But he would pretty much have chemistry with any woman.

Lionel and Jean (Palmer and Dench) in As Time Goes By--marvelously so. It's the heart of the series.

Having great chemistry and being believable lovers on a show are two completely different things, if you ask me.

Bob Newhart & Suzanne Pleshette pulled it off. Even though no one could ever really think Newhart as a sexy man Pleshette made you believe she really loved and desired her husband.

I watched the pilot of Moonlighting last month and I couldn't get over how forced it all was. Cybill Shephard annoyed me and Bruce Willis was too aware of how clever/cute he was being. The show hasn't aged well at all.

As for gay couples -- I think many of the guys on QUEER AS FOLK had good chemistry. Some of them looked like they were very into each other and weren't acting at all. Kevin (Matthew Rhys, now on that spy show) on BROTHERS & SISTERS and his boyfriend the wanna-be chef (forget his name) were completely believable and very hot most of the time. When gay couples appear on sit coms they all too often become buffoons as in MODERN FAMILY, WILL & GRACE, even ELLEN.

How could I forget AS TIME GOES BY and THE BOB NEWHART SHOW. I also so far like the chemistry in LAST TANGO IN HALIFAX.
John-Often instead of casting two gay actors, they seem to use on straight actor and it never works then. I always meant to watch B & S but Calista Flockhart put me off it.

Some of those eighties shows do not age well.Like REMINGTON STEELE.
I watched an episode of FAMILY TIES not long ago and the acting/plot seemed absurd.

Fred and Ethel? Barney and Betty? No, you said "chemistry". The couple on Eight is Enough? Or how about Tim Allen and Patricia Richardson on Home Improvement?

Fitz and Simmons of AGENTS OF SHIELD.

Homosexual characters never have romance on TV, do they? They are comic relief. Sex and romance is verboten.

I sometimes watch reruns of MODERN FAMILY and the two guy characters on there are more the stereotypical bumbling dads and the loving-but-carping-couple.

Although there was no romance involved, Steed and Mrs. Peel had incredible chemistry.

The best. And I like to think that somehow they ended up together.
The guys on MODERN FAMILY rarely make eye contact. I have the feeling they can't stand each other.

Cybill Shepherd seemed kind of phony, and Bruce Willis was tiresome with his I'm-so-hip-and-cool-and-cute act.

Alyson Hannigan and Amber Benson were cute together. I quit watching Buffy the Vampire Slayer when they killed off Tara.

Xena and Gabrielle (Lucy Lawless and Renee O' Connor), and Daria Morgendorffer and Jane Lane were not openly gay couples, but both shows dropped hints. Either way, they were likable characters.

Fred and Ethel had zero chemistry for me. Apparently he was an appalling person that they all despised. Never watched Buffy or Home Improvement. Hunt and Reiser, oh yes. And Dick and Mary for sure.

I don't think anyone on I Love Lucy liked his or her fellow cast members. Lucy wanted Frank Nelson to play Fred but he was unavailable. I don't think he would have been as good, talented as he was.

Oh, and on Emma Peel's last show her long-lost husband came back from the dead and she went away with him. He affected the same outfit as Steed, bowler hat, bumbershoot, and all.

Daria and Jane on DARIA were BFFs, but I don't think they ever went so far as romance. BUFFY's troubled romances (of all descriptions) and some of the couples on THE L WORD worked pretty well. ONCE AND AGAIN and RELATIVITY certainly worked for me, and the same folks' THIRTYSOMETHING worked better for others.

MODERN FAMILY is as bad now (and has always been) as MOONLIGHTING was then (and will always be).

The Laceys' marriage on CAGNEY AND LACEY...BUTTERFLIES, another fine BBC sitcom...NO, HONESTLY, an even earlier one from the duo responsible for WODEHOUSE PLAYHOUSE...the Carlsons on WKRP IN CINCINNATI (not Mama Carlson, mind you), and a consistent trembling on the verge for Bailey Quarters and Johnny "Fever" Caravella...not as Hot as hyped, but certainly companionable, Davenport and Furillo on HILL STREET BLUES...

Ah, you didn't say Novels before.

Though Daria did carry a torch for Jane's brother for the longest time. Jane, rather like Greg Proops, noted at least once that despite all appearances, she was pretty heterosexual.

LAST TANGO IN HALIFAX comes back for a second PBS season in June, and a new gay-male themed sitcom, VICIOUS, will be imported from ITV by PBS along with it.

Doesn't have to be novels. A slip. Just crime fiction.

Ooops, incorrect. NO, HONESTLY was a London Weekend Television series, WIKIPEDIA reminds us.

DARIA was one of the best shows on television.

I think the Howells on GILLIGAN'S ISLAND - for all the unrealisti nonsense of the show - had a kinda realistic marriage.

Hm. I should probably revisit NO, HONESTLY...haven't seen it since it was imported in the latter '70s...though an obvious progenitor was also cited online: BURNS AND ALLEN.

DARIA was easily the best series ever on MTV. And one of the better ones so far of any description.

My primary lesbian consultant notes that her favorite L WORD duo was Dana and the Sous Chef.

I like Joyce and Tom Barnaby on The Midsommer Murders (based on Caroline Graham's mysteries)--they have an appreciation for and a tolerance of each other's qualities (good and bad) that any couple must have for their relationship to survive the long haul.

please can you visit here..