My Dad, Ralph Edward Nase, served in World War 2, drafted on the day of his marriage at age 27. He was in Europe for four years, landing at Normandy, he also served in the Battle of the Bulge. He never said a word about his war experience other than that the food was horrible.


Below the two pictures of my Dad is Phil at age one waiting for his father to come home on VJ Day.  His Dad was in the Merchant Marines and spent most of the war at sea near Russia. We have no pictures of William Harvey Abbott in his uniform.

Phil's brother, William Edward Abbott (Billy), enlisted in the Marines at age nineteen, expecting to be a hero. He came home a year later with a Silver Star and three Purple Hearts. He never recovered from his war experiences, having spent his time in Da Nang as a point man. He could push on his legs and eject pieces of shrapnel. He was dead at 29.

This is our family's experience with war. I hope no one is asked to die for such a thing again. It is far too much to expect of anyone. 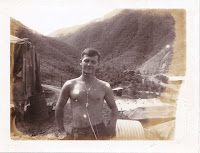 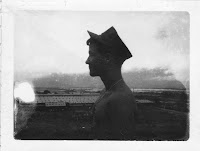 I'm grateful for all who served, especially my sister who retired last year after 25 years in the Air Force.

Great pictures, especially the one of Phil!

My father enlisted at 17 right after Pearl Harbor and spent nearly four years in England working on planes for people like Gen. Omar Bradley. I don't have it here but he still has a famous (in the family) picture of him drunk out of his head in full Highland regalia in Edinburgh on leave.

Jackie's father served with Patton. He didn't talk about his experiences either, other than firing the big artillery guns.

A very nice post, Patti. Thank you for sharing.

Lest we forget, indeed.

My brother-in-law served on submarines during the Korean war but never talked about it either.

Too horrible to ever speak of again.

Patti - I couldn't possibly agree more. Thanks for sharing.

I've learned I had a great uncle who was killed at the Battle of the Bulge. That's the only relative I have who served during war time, that I am aware of, that is. I don't know much about my family.

My father served four years on a destroyer in the Pacific. He almost died when a kamikaze plane hit his ship. We have a lot to be thankful for. Past generations sacrificed so we could be free.

Thanks, Patti. A distant cousin died in VietNam. It was so moving to find his name at the Memorial in DC.

That memorial brought me to tears. Something about it just works for me more than statues or such.

My grandfather missed WW 1 and 2 because he had a punctured ear drum. My father's oldest brother, Vincent, died in WW 1. He was that much older than my Dad.

Jackie's grandfather served in WWI as a medic. Any time anyone got hurt he'd want to treat you, which mainly consisted of pouring peroxide on whatever was hurt, much like Michael Constantine with the Windex in MY BIG FAT GREEK WEDDING.

Wow, that kamikaze story is scary, George. My father had a good friend who spent the war in the Pacific and came home with malaria, which flared up occasionally for the rest of his life.

Ah, but it's never the politicians who have to do the fighting….

During WWII it was different. There were a number of members of Congress who enlisted and went off to war. You don't see much of that these days, although we have a new crop of veterans in Congress now.

We don't need the manpower now that we have drones.

Thanks, Patti. We all have much to be thankful for. My father fought in WWII as well. He was in Europe. But he never spoke about any of it.